After falling to the Golden State Warriors in last season’s NBA Finals by a tally of four games to one, the Eastern Conference champion Cleveland Cavaliers will be looking to bounce back in their 2017-18 campaign.

Will the Cavs be able to make it to the NBA Finals for a fourth consecutive season? According to the latest report from Bovada LV, Cleveland’s odds of winning the Larry O’Brien trophy are set at 15/4. For those who can’t be bothered with wagering, that simply means every four dollars bet will net 15 in return.

The Warriors, who were given 4/7 odds to repeat as champions, are the favorites in next season’s betting line. The Houston Rockets were given 12/1 odds, while the Boston Celtics and San Antonio Spurs are both listed at 15/1.

Who has the lowest odds of winning a title next season, you ask? The Brooklyn Nets, Orlando Magic, Phoenix Suns, and Sacramento Kings find themselves at the bottom of the list (500/1). For a full list of odds, you can visit this link. 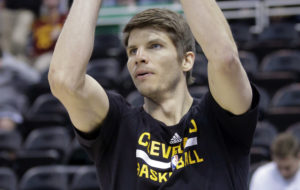