After last night’s 126-91 blowout loss at the hands of the Golden State Warriors inside Oracle Arena, a certain friend of LeBron James found his way inside the Cleveland Cavaliers’ locker room.

Baron Davis, who suited up in Wine and Gold during the 2011 NBA season, made a surprise visit to James as he spoke with members of the media. ESPN’s Dave McMenamin recants the funny scene in his recent article.

Funny scene in the Cavs’ postgame locker room: Baron Davis weaved his way through the crowd of media surrounding LeBron James’ cubby to finally greet the 4-time MVP. ‘The King!’ Davis said, with a big smile. ‘You’re harder to get to than Princess Zelda. I needed like a key, and a heart and a ruby to do that.’ After making the charming, if not outdated, video game reference, Davis told James that his kids don’t believe him when he tells them that Daddy knows LeBron and he has to bring up old YouTube clips to show them. James invited Davis to check out some Cavs practices back in Cleveland sometime this season.”

At 37 years of age, Davis isn’t ready to give up on the NBA just yet. The talented ball-handler still has aspirations of making a roster, as he told Complex.com last year.

That’s the goal,” the two-time All-Star said. “I won’t stop until the mission is complete.” 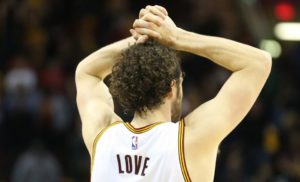 JUST IN: Kevin Love not expected to miss time due to sore back
Related TopicsBaron DavisCavaliersLeBron JamesWarriors