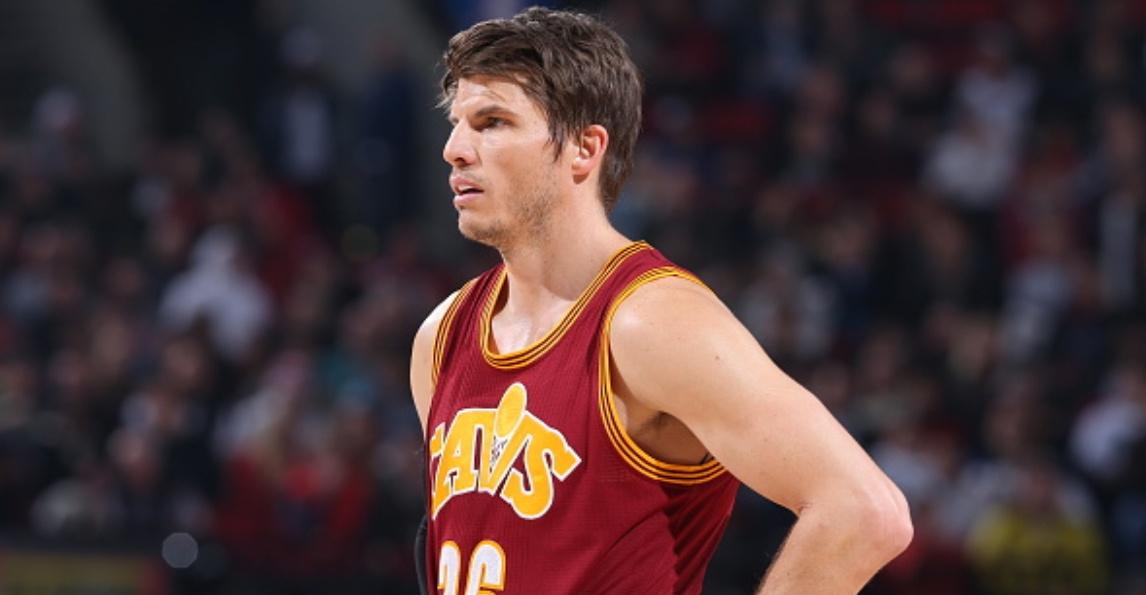 The NBA’s defending champion Cleveland Cavaliers have a matchup against the Atlanta Hawks tonight at 7:00 p.m. EST inside Philips Arena.

Kyle Korver, who played just under five seasons with the Hawks, was traded the Cavs on January 7th for a 2019 first-round pick in the NBA Draft, Mike Dunleavy, the contract of Mo Williams, and cash considerations. Since then, Korver has played in 23 games for the Cavaliers.

This morning, Korver, who still owns a home in Atlanta, spoke to members of the media with regards to coming back to the city that he use to play for.

“It just felt like I was on a really long road trip and then I came back and I’m like, ‘This is our house,'” Korver joked before today’s shootaround inside Philips Arena.

Korver mentioned that the Cavs arrived in Atlanta shortly after 4:00 a.m. EST on Thursday. The smooth-shooting swingman told Joe Vardon of cleveland.com that he slept in the team hotel, then went to his suburban home where his wife and children are staying.

Korver’s stint with the Hawks left a lasting impression on his former teammates and coaches, including Mike Budenholzer, Atlanta’s current Head Coach and Team President. Coach Budenholzer spent some time with Korver and his family on Thursday afternoon to catch up a bit.

“He’s not supposed to tell you guys that. He’s not coachable,” Budenholzer said with a laugh. “That guy drove me crazy. No, no. Seeing him now, and really he’s got a great family – Juliet and the kids are good friends and special people. So it was just more catching up on family stuff and I think we’ll be friends for life.”

It was Budenholzer who signed off on the deal that sent Korver to Northeast Ohio. In the NBA, difficult decisions must be made — even if they involve a “friend for life,” as Budenholzer dubbed Korver.

“This league, there (are) lots of hard decisions you have to make,” Budenholzer told Vardon.

As most NBA fans will remember, the Cavs have swept the Hawks out of the playoffs for the past two seasons. Budenholzer is well-aware of that fact, and says it’s bittersweet seeing Korver play on a championship contending team.

“I think it’s really bittersweet,” Budenholzer said today. “Obviously, Cleveland is a huge rival. We very much want to beat them and we feel like we played them twice in the playoffs and if that’s how it happened again, we’d be ready to go to war.

“So, but, at the same time and in the same breath, giving Kyle (Korver) a great team, a great situation, great teammates, there is a little bit of … that helps.”

Just after the first quarter of tonight’s game, the Hawks will honor Korver with a video tribute. Reportedly, the Hawks will show highlights of his days with the team. Korver spoke about the memories he made in Atlanta after today’s shootaround.

“I realized yesterday, I’ve got to think about it a little bit,” Korver said. “There’s been so much going on. I’ve got to process this now so I’m not doing it during the game. That’s where you get yourself in trouble. Obviously a lot of great memories and friends and great relationships here. I’m sure a lot of that will come to the surface during the game.”

Through 23 games with the Cavaliers, Korver, who is shooting the three-ball at a 50% clip, is averaging 11.3 points and has made at least one three-pointer in his last 21 outings (66-of-126 from downtown during that frame).

Dwight Howard, Atlanta’s new addition in the front-court, knows how dangerous Korver can be when he’s on the floor. Howard had just one thing to say about facing Korver tonight.

“On the floor, he’s the enemy,” Hawks center Dwight Howard said. “So that’s how we got to look at it.”