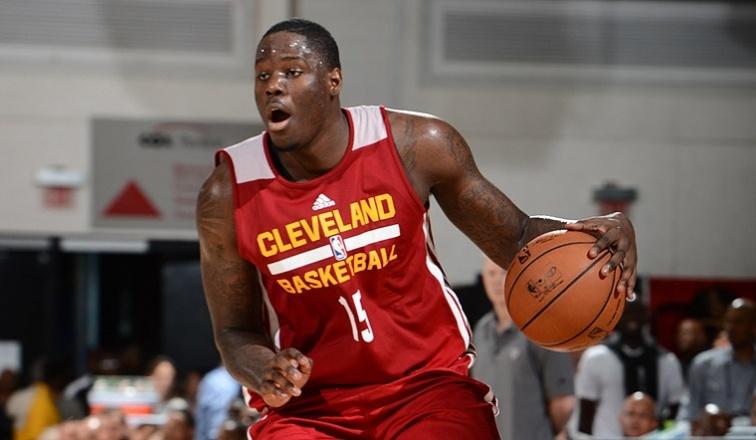 Universally, the names of Kwame Brown and JaMarcus Russell are synonymous with the term ‘Draft Bust.’ Both Brown and Russell travelled different journeys in their professional careers, but were the biggest mistakes in both the NBA and the NFL drafts. The Cleveland Cavaliers’ first overall pick, Anthony Bennett, was in danger of the dubious honor of being mentioned in the same breath as Brown and Russell. Last year, Bennett proceeded to have one of the most lackluster statistical seasons as a first overall pick rookie. Fortunately for Bennett, he has time to change the trajectory of his career.

The Cleveland Cavaliers surprised everyone, most notably Bill Simmons, by selecting Bennett with the first overall selection. The move by then-Cleveland General Manager, Chris Grant, was a curious one particularly as the Cavaliers had spent the fourth overall selection 2 years prior on another power forward in Tristan Thompson. In his one season at UNLV, Bennett was a well-rounded scoring force, he could spread the floor, post up and was especially dangerous in pick and roll situations. As a freshman, Bennett averaged 16.1 points and 8.1 rebounds and his offensive arsenal was very advanced for a 19 year old. However, it was clear that Bennett had many defensive deficiencies and his athleticism was sub-par. In the NBA, Bennett was always going to struggle against more athletic power forwards but he would always make them accountable as a result of his offensive skillset. Still, there were far better options for the Cavaliers to take with the first overall pick.

If it wasn’t enough for the Cavaliers to reach for Bennett, former coach Mike Brown then inexplicably insisted on playing Bennett at Small Forward. At the peak of his athletic prowess, Bennett was never going to be able to guard perimeter players, especially with the increased number of athletic wings in the league; however this problem was exacerbated by Bennett needing to recover from surgery to his torn left rotator cuff. Bennett showed up to camp out of shape and struggled to find his fitness, this amongst a plethora of other factors should have indicated that Bennett was not going to find success on the perimeter in the NBA.

Unfortunately, Bennett was never given a chance to prove himself in his rookie season, he averaged a measly 12.8 minutes per game. No other number one overall pick has averaged so few minutes in their rookie season. Coach Brown had a mandate to make the playoffs and could not afford Bennett the time to play through his growing pains, which were doubled due to him not only having to adjust to NBA pace but also needing to adjust to playing a new position. However, at just 20 years old and with a new coaching system in place, all is not lost for Bennett.

{adinserter 2} In the 2014 Las Vegas Summer League, Bennett looked like a completely different player, making 42.6% of his shots as compared to 35.6% in his rookie season. Bennett also appeared to have dropped a lot of weight and finally seems to understand the conditioning requirements for NBA players. There are still a multitude of things to work on for Bennett but it appears that he is taking strides in the right direction. Unfortunately for Bennett, the Cavaliers mandate of making the playoffs last year has gone to winning a title this year.

Trade rumours are abound in Cleveland and Bennett’s name has been mentioned in nearly every one of them. Originally Bennett has been talked about as being part of a package deal to bring in Kevin Love; however recently, it has been reported that if a deal between Minnesota and Cleveland is consummated, then the Timberwolves will on-trade Bennett to the Philadelphia 76ers for Thaddeus Young. While a fresh start with a rebuilding team will be great for Bennett to find his place in the NBA, Bennett’s potential impact for the Cavaliers cannot be understated. It is clear that new Cavaliers coach David Blatt wants to utilize as many flexible line-ups as possible and it is no secret that Lebron James will have to play more power forward for the Cavaliers. No player allows the Cavaliers to use smaller, fluid lineups than Bennett.

A small lineup Consisting of Irving, Waiters, James, Bennett and Varejao/Thompson will provide teams with a headache. Bennett and James will be able to continually switch opponents and spread the floor for the driving Irving and Waiters. Bennett will limit the minutes that Lebron will have to guard the bigger more bruising power forwards, which will indirectly increase the longevity of Lebron’s career. Furthermore, when there are less athletic wings on the floor, Bennett has the capability to guard them, and who knows with his increased conditioning he might even be able to go with the more athletic wing players in the near future. Bennett will allow Blatt to utilize a fluid system and even implement his own version of position-less basketball (a concept thrown around by the Sacramento Kings daily).

Despite a disappointing rookie campaign, Anthony Bennett has the ability to become a serviceable NBA player and a potentially vital player for the Cavaliers. However, if Bennett is traded, it is imperative that he be given a chance to develop and not be forced to play out of position. In saying this, the impetus and desire to improve must be shown by Bennett and he will need to work hard to capitalise on his potential. Climbing out of mediocrity will not be an easy task but by dropping weight this summer, it seems as though Bennett is heading in the right direction. He cannot afford to get disillusioned if he is traded. The curious case of Anthony Bennett will continue to intrigue throughout the years and we can only hope that he is never mentioned in the same breath as Kwame Brown or JaMarcus Russell.