The Cleveland Cavaliers could dangle two of their most recent acquisitions in the trade market, as newly-netted Alec Burks and last season’s trade target Rodney Hood could be leading candidates to be traded once they become eligible on Dec. 15, according to ESPN’s Brian Windhorst.

The Cavs have already dealt Kyle Korver and George Hill this season, and given their 6-21 start to the current campaign, it’s likely they’ll start out a wholesale mentality moving forward.

Marksman J.R. Smith has been exiled from the rest of the team and is patiently awaiting a resolution to this breakup with the Cavs and their front office. The Houston Rockets have been among the teams showing interest in his services, but that has yet to crystalize into a solid offer.

Cleveland is at odds right now, unable to see the real contribution these players would bring with Kevin Love at the forefront of the offense, but neither Burks nor Hood nor Smith offer anything significant at the defensive end, already showing a huge hole moving forward with this team.

The Cavs will try to stockpile as many draft picks as possible in the process and hope to stumble upon franchise-changing talent, just like they did with LeBron James and Kyrie Irving in the past. 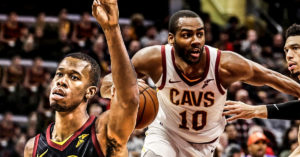