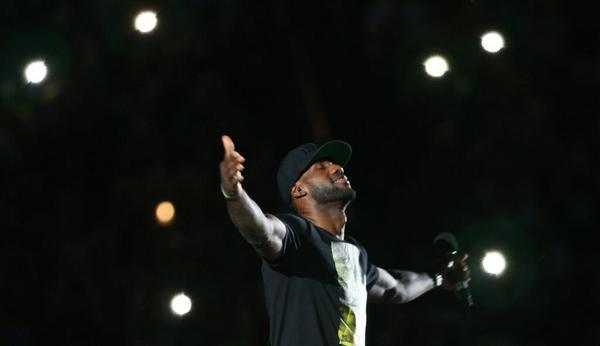 Celebrating the arrival of a superstar has had two different interpretations in the past 4 years. In 2010, Miami welcomed its highest free agency prize in LeBron James with an expensive stage, flashy lights and, not going to lie, a pretty sweet fog machine. Today, a month after LeBron changed everything in NBA for a second time, Akron held a “Welcome Home Rally” to invite its prodigal son back home. It was humbling, down-to-earth, and stood for more than just a pep rally. It was a sincere moment shared by thousands of resilient fans that felt salvation in the return of the King.

After spilling infamous words of heartbreak 4 years ago, LeBron addressed his hometown with words of longing and pride: “I don’t plan on going anywhere… Don’t have enough energy to do it again.” Inspiring and charming, which has been very evident in LeBron’s character after graduating from “Pat Riley’s College of Professional Basketball” in Miami. His maturity and development into the man he is today was completely embodied into the theme of his welcome home rally.

“I don’t plan on going anywhere…Don’t have the energy to do it again.” -LeBron James on ending career with the Cavs pic.twitter.com/XzHVQEotpz

Reminding Cleveland about LeBron’s maturity into manhood was Akron Mayor, Don Plusquellic: “He [LeBron] said that ‘Akron, Ohio is my home.’ And he gave back to it.” From samples of his LeBron James Family Foundation to his contributions to Boys and Girls, the rally stressed the importance of LeBron’s commitment. The mayor praised LeBron for making a difference in his home an obligation, and transcending the simple concept of a promise into an emblem of inspiration.

{adinserter 2} LeBron’s return means more than basketball and philanthropy though. Cleveland gained more than LeBron the player. We were blessed with more than LeBron the giver. Tonight showed us that we also have LeBron the second father. LeBron the promise-maker. LeBron the leader. He made it really clear, through Skylar Grey’s emotional performance and an OH-IO chant competition, that he’s different. 4 years ago he counted “Not 1… Not 2… Not 3…” championships he would win in Miami. Today he counted all the kids he was going to help finish school in Akron. 4 years ago, he said his biggest goal was to win championships. Today, he said winning a championship for his city would be his greatest achievement. He loves us. He’s back. Are we?

Before LeBron James steps into the Q. Before he wears his old #23. We need to say something to LeBron: “We are sorry.” This summer people have all too easily forgotten how badly we hurt him. LeBron made a decision, and he lived with it. He moved on, and that ended up being better for everyone. It took a long time for us to do the same. We carried the burden of too many bitter feelings for too long. “Let the rain, wash away, all the pain, of yesterday. I know that Cleveland awaits, and they’ve forgiven my mistakes. I’m coming home.” Now, we need to seek redemption like LeBron as fans. That’s our challenge to accept.

Take it away Skylar!