After Rough 2013-14 Season, Kyrie Irving Is ‘Commanding Respect’ With His Game 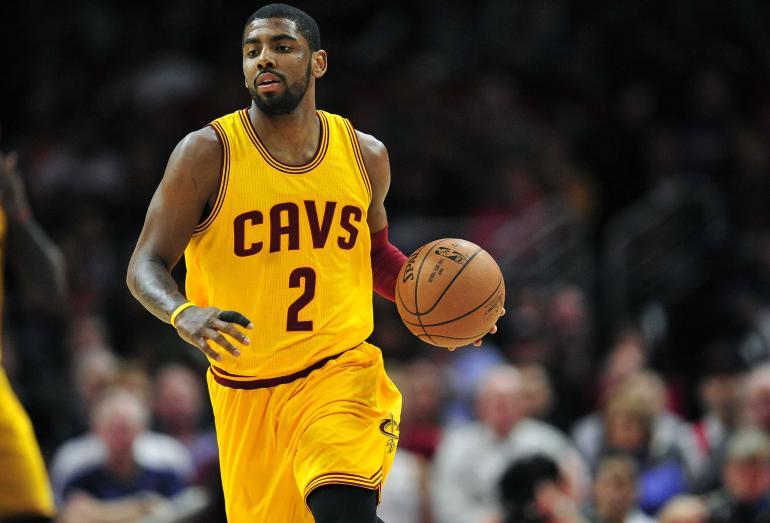 It all started at the Cleveland Cavaliers Media Day of the 2013-14 season, where Kyrie Irving, starting his then third season, started out with this:

“I want to be the best player in this league. In order to do that, I know we have to win a lot of games. But I’m the leader of this team, and I’m ready to take responsibility for it by helping us make the playoffs. This is the best I’ve ever felt coming into a season.”

He won Rookie of the Year his first year, made the NBA All-Star team his second, and he set even bigger goals for himself the third year with those comments. He was optimistic, but he had no idea the attention he drew to himself.

Sure, Irving averaged 20.8 points, 3.6 rebounds, and 6.1 assists per game in what was a solid individual season, but that wasn’t without the outside criticism and rumors that constantly swirled after his “I want to be the best” comments on Media Day.

Per NEOMG, Irving says that last year was a year he’d like to forget, despite having career numbers and winning the NBA’s All Star MVP award. From reports that he was being a bad teammate and not sharing the ball enough, to his reported beefs with then-guard Dion Waiters and not wanting to stay in Cleveland when his rookie contract was up, all of that added increased pressure on Irving’s shoulders. According to Irving, it was a lot to handle:

“It really got to me,” Irving said. “I’m not a big Twitter person and I don’t Tweet a lot of my emotions, but last year I was clarifying because there were so many sources,” he said. “I’m dealing with people coming at my character. Saying I’m detrimental to my teammates and I’m like, ‘Man, that’s not even close to who I am at all.’ It started to get to me because once people start to question the things that you’re doing, and you know you’re not doing them, then it starts to get to you.”

Even Irving’s teammates could tell it was taking a toll on him, as Tristan Thompson said:

“You can tell that all of it bothered him. We saw it and tried to help. That was a crazy year. All types of things were being said or reported.”

Despite all the rumors that Irving didn’t want to be a Cavalier after his rookie contract was up, it turns out he did, as he signed a five-year max extension with the Cavs this past summer before he knew LeBron James intended to sign with the Cavs and before embarking on his trip to play in the 2014 FIBA Basketball World Cup tournament in Spain.

In Spain, he was told to play his game and his style of basketball, and that’s exactly what he did. He averaged 12.1 points, 2.6 rebounds, 3.6 assists, and 1.9 steals in 24 minutes while sharing the floor with the likes of Stephen Curry, Klay Thompson, James Harden, and Anthony Davis. His performances would lead Team USA to the gold medal after winning all nine of their games. In addition to that, he would be named the 2014 FIBA Basketball World Cup MVP and the 2014 USA Basketball Male Athlete of the Year.

Fast forward the Media Day of the 2014-15 season, and naysayers who talked about he and LeBron would mesh or how he and Kevin Love would have to take a back-seat to LeBron were rather irrelevant, because after playing with stars on Team USA, Irving didn’t think of it that way anymore:

“For me, I was just like God blessed me with a lot of talent that I’m thankful for and I really worked my tail off to have that ability to be one of the best players on any floor at any given time. That’s just the confidence that I have in myself.”

Irving may have only wanted to prove to himself that he could be the best player in the NBA by making it known publicly, then sort of forcing him to play to his best each and every night, but it didn’t turn out that way. Having learned from that experience that affected him negatively, Irving keeps his goals and achievements he wants to reach to himself. Maybe a teammate or two know of them, but Irving is going to go out there every night with those goals on his mind.

He’s done quite a good job of that recently, as he’s scored 90 points in the last two games alone. In those games, he’s shooting a sizzling 32-of-47 from the field and 11-of-12 from three-point land as well. He led a Cavaliers team that was down and out of the San Antonio game by 10 points with just over two minutes remaining into overtime, and then sealed the deal there, scoring 57 points that night.

“My sole reason for me playing this game has never been for attention, it’s never been for approval. The only thing I command is respect,” Irving said. “I just let the proof be in the pudding. I don’t say I’m going to do something; I just go out and do it and then I feel like it just ends up hitting them in the face when it actually happens because they’re like, ‘Well we said this about him but he completely did the opposite and did it way more than we expected.’

“I have a confidence in myself that whether you like me or not, I really don’t care because I’m going to command your respect, especially out there on the floor where you can’t deny me. I was that guy on the cusp trying to fight my way up and I still am. I still feel that way. I’m always going to have that attitude, but in terms of what everybody else thinks, I really don’t care.”

Irving is sticking to what he knows to do and that’s play basketball. He lets his game do the talking and he can always talk to veterans like LeBron, James Jones, Mike Miller, and Shawn Marion to get some things off his chest instead of making them publicly known.

Irving says these are his main goals, and no one can argue with these:

“As long as I’m doing my due diligence and that’s representing my family well in the community, impacting the youth as best I can and inspiring my younger generation – anything else, I’m not worried about,” he said.