A Recap Of The Cavs’ First 10 Games In a young Cleveland Cavaliers season, there is much to be impressed about with an 8-and-2 start. There’s no surprise the team has been led by LeBron James and Kevin Love, but the Cavs have also seen some very healthy inputs from Mo Williams, Matthew Dellavedova (combining for averages of 23 points, 10.4 assists, 6.2 rebounds and 1.6 steals per game so far) and Richard Jefferson.

Even with their record, LeBron James expects more from these Cavaliers. Kyrie Irving and Iman Shumpert are still sidelined while J.R. Smith in and out with injuries, but those aren’t enough to pass as excuses for the Akron, Ohio native. James admitted to reporters that the Cavaliers play with “half-ass effort” from time to time, which puts Cleveland in unfavorable late-game situations. If there’s that much discontent with the current 8-and-2 record, Cleveland is in good stead.

To this point, it is the general gameplay rather than the stat sheets that should be impressing the Cavalier faithful. The Cavs rank amongst the top five in the league in rebounding, assists, and plus/minus, but these stats do not tell the whole story.

With Kyrie Irving in street clothes on the bench, it has to make every Cavalier fan around the globe smile to see how involved Kevin Love is in the offense. Love is attempting three field goals a game more than last season, and more of them seem to be around the basket.

Cleveland has also shown the grit and determination needed to pull off late game comebacks. It’s not exactly the best strategy to give up big leads and come storming home late, but this team has shown the ability to come back and win tight games.

With all these positives, there are sure to be some negatives. The silver lining being that with such a record, the Cavs still have plenty of room for improvement.

Smith, Love, and James all find themselves in a shooting slump in comparison to last season. I know that sounds ridiculous after seeing LeBron James go for 37 points in Milwaukee, but the numbers don’t lie. J.R. Smith has regressed the furthest from last season’s numbers, ultimately cutting his nightly scoring average in half. J.R went for 12.7 PPG with the Cavs last season after the midseason trade, to 6.3 PPG, shooting 30% from the field, 25% from long distance, and 33.3% from the line this year. With Shumpert and Irving sidelined, Cleveland simply cannot afford to have Smith continue this slump if they plan on continuing their winning ways.

LeBron James has seen his overall game improve, he’s a fit and firing new man out there on the hardwood floor, but his shooting touch has taken a nosedive. James’ three-point percentage has been terrible, dipping from 35.4% to 26.2%, and his free throw percentage has also taken a dive from 71.0% 60.5%. But even with those numbers, he finds himself still putting up 27 points a night.

With all of those things Cleveland need to work on, they find themselves leading the East with an 8-and-2 record, and definitely the team to beat on the east coast. With Mozgov and Varejao still not 100% after their respective surgeries, Kyrie Irving and Iman Shumpert still to see the floor, the league should fear the healthy return of this roster.

When Cleveland have their full roster back together and rolling, this will be one very tough team to be stopped. Afterall, there is an unfinished business to attend to this season. 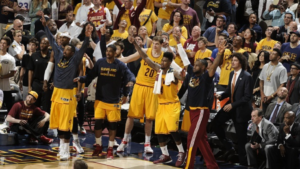