A Bright Present and a Bright Future? 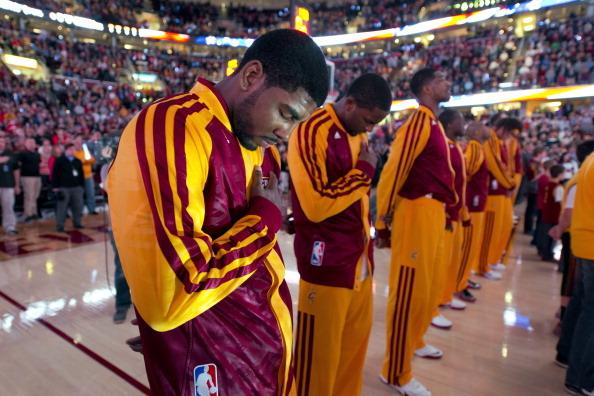 With all the attention circulating the Kevin Love possible trade scenarios, most forget the Cavs haven’t ever featured a team as deep as what appears it is going to be this season. While some are pushing to win a championship at all cost next season, which they possibly still could this year with their current line-up, let’s not forget the future can be very bright. As the team stands right now we will have our 2x All-Star point guard Kyrie Irving locked up for the next 6 years, and our future wing and #1 overall pick, Andrew Wiggins, signed for 5 years. LeBron James might have only signed a 2 year deal, but most assume he will be a Cav for the long haul as well. That leaves the team with an amazing point guard, shooting guard, and small forward all to build around for the future. The power forward spot right now is occupied by Tristian Thompson, who many believe may have reached his ceiling as a 12 and 10 guy. {adinserter 2} Thompson is still very young and at worst case a good position defender, rebounder, and energy guy off the bench. Who knows how much better Thompson will be with LeBron (remember a young J.J. Hickson dunking on passes from LeBron?). That leaves the center position with Anderson Varejao, who is a great positional defender and has proven to play well off LeBron as well. That leaves the bench with Dion Waiters, Matthew Dellavedova, Mike Miller, James Jones, Anthony Bennett, and Brendon Haywood. Waiters has 6th man of the year potential if he is willing to accept that role, his passing will help LeBron and Wiggins in the fast break. Waiters scoring ability will be crucial as well since he should expect a lot more open looks this year. With Delly, we get a pesky defender and he has shown his ability to knock down open three-pointers as well. Mike Miller is a huge addition as he was a integral part to the championship run in Miami. James Jones is another three-point specialist that will find his way into some games. Anthony Bennett showed some major improvements in the summer league and if he can stay in shape and improve his shot, he might find his way into the starting lineup. Brendon Haywood isn’t the center he used to be, but might be a quality reserve for Varejao.

The good thing about most of these players is that they are interchangeable. If the Cavs want to run a small line-up, it is possible with Irving, Waiters, Wiggins, LeBron, and Varejao. They have good defensive players starting in Wiggins, LeBron, Thompson, and Varejao. With some better effort, Irving can emerge as a great defender as well. There is plenty of scoring with Irving, Waiters, LeBron, Bennett and Miller. With Coach Blatt, this team has a lot going in the right direction. The one glaring weakness with this team is the frontcourt. Varejao is getting older and hasn’t been healthy for a full season in years. While the big men on this team are good positional defenders, none of them are any good at protecting the rim. The only one who truly has the potential to score on his own is Bennett, who still has a lot to prove even after an impressive summer league. The centers are both older and injury prone which is risky as well.

Inside of LeBron’s Mind

The focus on a big man might switch to trying to trade for a big man like Larry Sanders or Omer Asik, who are both younger and quality defensive centers. Maybe looking at next year’s free agent big men such as Marc Gasol or LaMarcus Aldridge are better options. Then there is always the draft. If the Cavs keep their picks they could end up with Memphis’ 1st rounder if it falls between 5 and 15, the Heat’s 1st rounder that’s top 10 protected, and as well as their own pick, which we are hoping isn’t until the last pick in the 1st round. If in fact they get the Memphis pick, they could potentially pick a big man early, as there is a high talent pool of big men in the 2015 draft.. With the Heat pick and Cavs own pick they could take more NBA ready players who usually tend to fall into the later part of the draft, for example players such as Montrezl Harrell of Louisville or Willie Cauley-Stein of Kentucky. Harrell could be insurance in case the Cavs can’t afford to keep Thompson and Cauley-Stein would be much more of an impact player than Haywood. Then imagine if they get that Memphis pick, it could be good enough to get a player who falls in the draft.

Keeping a team with depth might keep LeBron’s minutes lower than in the past, which could extend his prime years. The fact we haven’t seen him slow down or experience a major injury is a plus sign as well. Our mixture of youth and veterans seems to bring a winning spirit to the city of Cleveland. Fasten your seatbelt Cavs fans, because this is going to one heck of a ride for Cavs fans. Even 2 or 4 years down the line, this Cavs team could be a year after year contender not only for the ECF, but the NBA Finals as well.