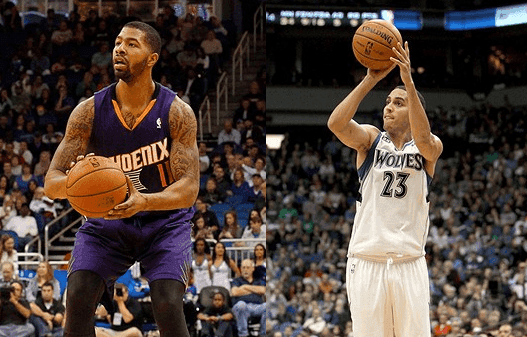 The Cleveland Cavaliers got themselves quite an expensive set of gift cards when they traded Brendan Haywood and Mike Miller in a package to the Portland Trail Blazers for some cash and a couple of Traded Player Exceptions. Prior to this trade, Cleveland was also the recipient of two player exceptions from separate deals in the past. The first one, which they got from the LeBron James trade to Miami, was left to expire while the second exception, acquired from the Keith Bogans trade to Philadelphia, was used in a package that sent Timofey Mozgov from Denver to Cleveland. Now, David Griffin is faced with the pleasant problem of finding the perfect exchange piece for those two Traded Player Exceptions. Cavs Nation presents a list of possible targets for the bigger player exception worth $10.6 million. Note that being a taxpayer, Cleveland is allowed to take in a little over $13 million.

The Magic are going nowhere next season making Channing Frye an expendable part of their roster. The Cavaliers will find use for Frye as he’s still one of the deadlier shooting bigs out there. Frye’s presence would give the Cavs another floor spacer outside of Kevin Love who can drag opposing centers out of the paint. Frye is a rare weapon that could be a great addition to LeBron James’ kickout options. O.J. Mayo has been labeled as a locker room headcase over the past few years but his skills are undeniable. In Cleveland, Mayo’s talent will be exhausted as he figures to compliment the Cavalier playmakers in LeBron James and Kyrie Irving with his excellent spot-up shooting. Last season, Mayo showed flashes of his old scoring Memphis-self albeit only in spurts but Cleveland should be able to present a stable situation for him to thrive. If someone like J.R. Smith was able to turn a new leaf in Northeast Ohio, why can’t O.J. Mayo? The Pelicans recently signed Anthony Davis to the biggest contract in NBA history which makes it sensible for them to save up on cap room. They aren’t short on big bodies either as they already have a couple of reliable centers on cheaper contracts. Omer Asik would be the odd-man out here because of his contract and the Cavaliers could use another rim protector as an insurance policy as Timofey Mozgov is their lone paint threat. If David Griffin desires, Asik would bring toughness, added playoff experience, and rim protection to the Cavaliers. The Minnesota Timberwolves already have their veteran leader in Kevin Garnett making Kevin Martin’s presence quite expendable. The Wolves should be looking to develop their young wingmen and Martin’s sharpshooting would be a significant addition to the Cavaliers’ armory. Martin doesn’t stop the ball and he is an extremely gifted catch-and-shoot option. The Ohio native is still in his prime and he could easily be inserted into the starting lineup of Coach David Blatt right off the bat. While it’s true that Arron Afflalo was recently acquired by the New York Knicks, the current state of their team does not promise a stable environment for the veteran shooting guard. Given this, David Griffin should again keep a close look at how the Knicks’ situation develops and take a crack at grabbing Afflalo the minute he sees an opening. Afflalo will instantly take the Cavaliers to a whole new level with his solid play on both ends. Who knows, New York may be giving Cleveland another one up next season.

The statistically better Morris twin Markieff has reportedly let it be known that he wants out of Phoenix. After the Suns signed the pair to a long term contract, Phoenix unexpectedly send his brother, Marcus, packing to Detroit in a move that opened up some salary cap room in their pursuit of LaMarcus Aldridge. Aldridge eventually signed with the Spurs, but Markieff no longer feels wanted in the valley of the sun. ‘Keef’ is making $8 million this season, and could be a very viable option for the Cavs this season. He averaged 15.3 points, 6.2 rebounds, 2.3 assists, and 1.2 steals per game for the Suns last year.