6 Gifts LeBron James Brought Back To Cleveland From Miami 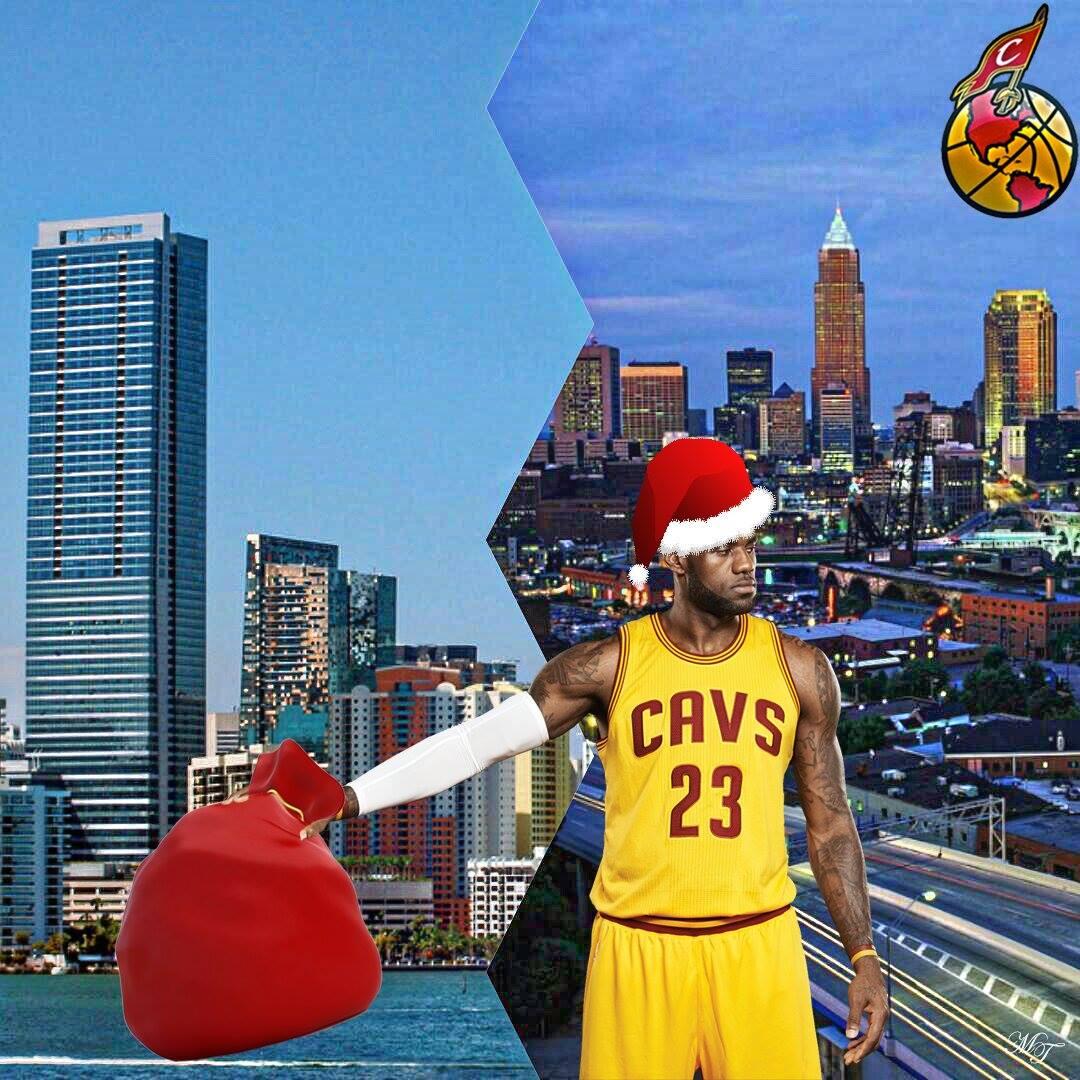 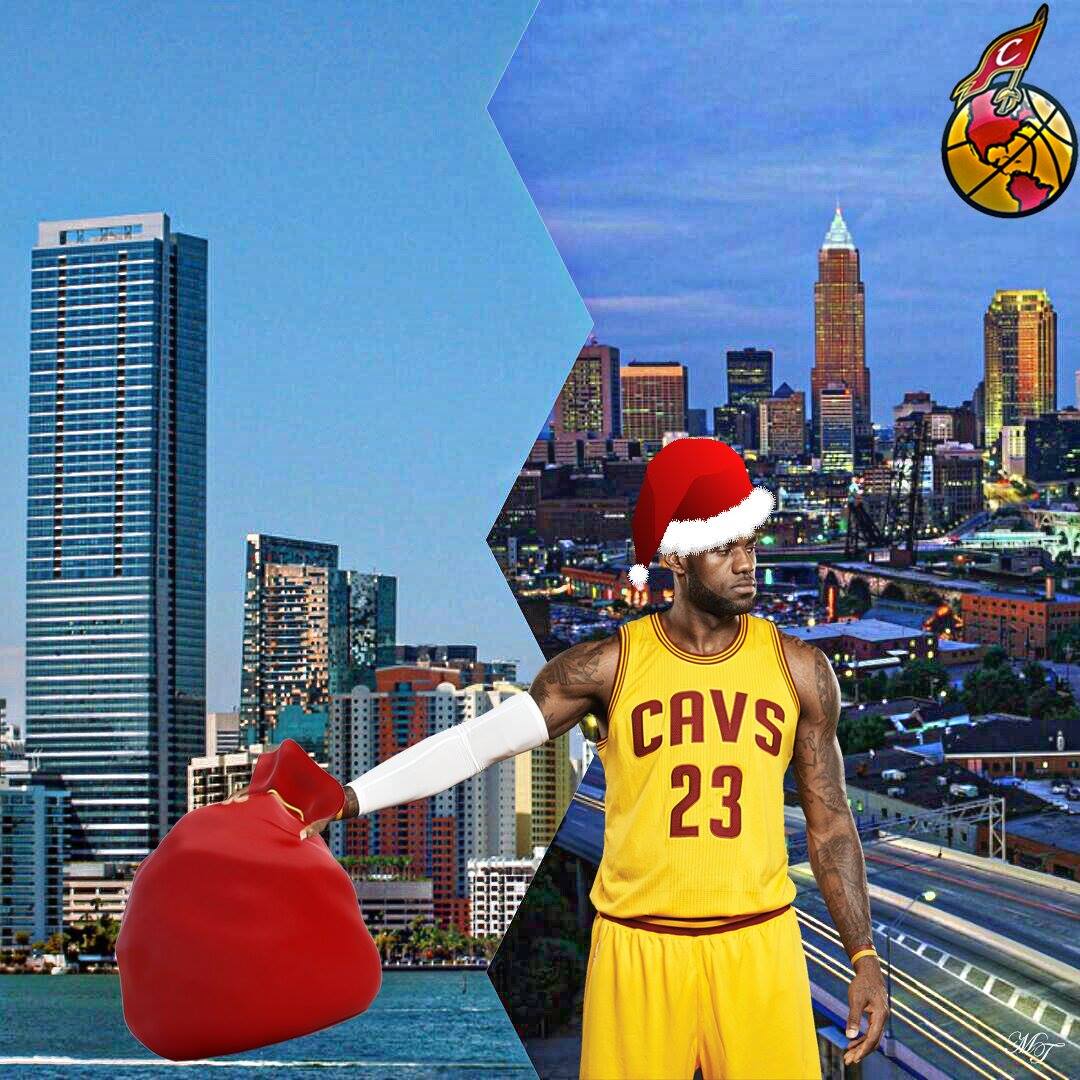 It’s the holiday season Cavs fans and the big Christmas day NBA games are here, highlighted by LeBron James return to American Airlines Arena to face the Miami Heat. As a member of the Heat for the past 4 years, James has posted averages of 26.9 points per game, 7.6 rebounds, and 6.7 assists. He has won back-to-back NBA Championships with them in the 2011-2012 and 2012-2013 seasons. James made a decision to return to Cleveland this summer, and in the spirit of the holiday season, Cavs Nation wants to take a look at some of the gifts LeBron James has brought for the Cleveland Cavaliers from his time with the Heat.

Start the gallery of giving on the next page with LeBron’s first present he’ll regift Miami with in today’s reunion:

Since his 2nd year in the league and first NBA All-Star selection, LeBron James has been the captain of the Cleveland Cavaliers. Often times, leading by example for James was simply putting the team on his back and scoring most of the points during a certain stretch. It was certainly an attempt at trying to be a good leader, but James’ efforts fell short along with his team as the Cavs were considered among the elite teams who could compete for an NBA championship.

James’ time in Miami did not start the way they were expected. The Heat started 9-8 and could not string together consecutive victories until their 10th victory of the season that sparked a 12-game winning streak led by LeBron James and Dwyane Wade. One of the victories was over the Cavaliers where James recorded a double-double. As a member of the Heat, he won and got a lot more used to the leadership role that was placed under. Leading a team, James found, was not just about scoring the last couple of points or making a perfect pass. It was about putting his team on his back and doing whatever was necessary to win and get better. LeBron James brought a new sense of leadership to Cleveland this season and many more to come.

When LeBron James was repeatedly ousted in the playoffs by the Boston Celtics or the Orlando Magic as a member of the Cleveland Cavaliers, he was undoubtedly the captain and leader of the team. In many instances however, James didn’t act like the mature leader on or off the court. In a playoff series against the Washington Wizards in 2008, James and then Wizards guard/forward DeShawn Stevenson got into a nonsensical verbal feud which involving rappers Soulja boy and Jay Z.

In another case, following a Game 6 elimination loss in the Eastern Conference Finals, LeBron James walked off the court without congratulating the Orlando Magic players and coaching staff. That was viewed as a bit childish and immature as he was an iconic sports figure and set a terrible example of sportsmanship to his fans, particularly the younger ones. To make matters worse, he also passed on the postgame media session, which he was later fined $25,000 for doing.

With the Heat, James quickly found out that it was unacceptable to do the things he did as he was held accountable by both the fans and the NBA offices. Along with that, he, Wade, and Chris Bosh had to endure probably the largest amount of criticism and scrutiny that any team has ever had to endure. “It was like taking on the villain role from the fans and,” as James called it. From the start of James first championship season in 2011-12, he began to ignore the haters and naysayers, instead just playing and focusing on basketball the way he loved and remembered it. With just basketball to look forward to, James was able to develop a hard shell against any scrutiny he or his teams faced, showing great signs of maturity from a player who struggled with it just years before. James brings to Cleveland the gift of maturity and the ability to withstand the media’s attacks on him or his teams.

An act of maturity that embodies James’ growth was the first domino that fell in this new era of Cleveland basketball: his personal letter to the world announcing his return home. The hardshell he’s evolved into has not only protected him from the media’s frenzy, but has also cleared his mind to reveal smarter ways to make his impact on his fans and the basketball world.  LeBron’s letter spread evangelically, and people felt his maturity with each word washing away the haunting memories of “The Decision” four years ago.

“People there have seen me grow up. I sometimes feel like I’m their son. Their passion can be overwhelming. But it drives me. I want to give them hope when I can. I want to inspire them when I can. My relationship with Northeast Ohio is bigger than basketball. I didn’t realize that four years ago. I do now.”

Over the years, LeBron James has had teammates with many different personalities. At a young age, James was forced to do a lot of the heavy lifting for the Cavs offensively and even defensively as he improved that part of his game. In Miami, James always had a solid supporting cast that the Heat just improved at every opportunity. The same can’t be said for the Cavs during James’ first term in Cleveland, as it was tough to surround James with enough talent to sit him during parts of the game for rest. Daniel Gibson, Drew Gooden , Anderson Varejao, Zydrunas Ilgauskas, and Mo Williams were the only decent but somewhat subaverage players at that time. James learned to trust his teammates in Miami, learning the favorite spots on the floor of Ray Allen, Mike Miller, Shane Battier, and Chris Bosh as well as how to attract enough attention to set them up. LeBron brings the gift of trusting his teammates to Cleveland which was fully expected and was on display when he said he’d like a player as smart as Love to join the Cavaliers. Now almost 2 months into the season, James all but knows where to set Kyrie Irving, Kevin Love, and Dion Waiters up to be successful.

During LeBron James first stint with the Cavaliers he shot 47.4% in 7 seasons. Knowing LeBron, these averages are absolutely absurd because he shot around 54.3% as a member of the Heat. Also, James has been increasing his field goal percentage every year since the 2006-07 season where he shot 47.6% up until last season’s 56.7% and ranked number 4 among the league. The players 3 positions ahead and below him were all power forwards or centers, making this feat incredible considering he made 116/306 3-point shots and 651/1047 2-point shots.

While James is a little underwhelming this season in the percentages largely due to the fact that he has new teammates and a new system to run under a new coach, he’s still shooting solid 49.5% and almost a career high 37.9% from downtown. He should get his numbers back to normal as soon as the transition process gets closer to its end. LeBron James brought the gift of himself back to Cleveland, only as a better, smarter, and more efficient player.

The Cavaliers’ recent draft picks in Kyrie Irving, Tristan Thompson, Dion Waiters, Anthony Bennett, and Andrew Wiggins, and Joe Harris were all made possible by the departure of LeBron James in the first place. James’s leave from the Cavs set them up to finish with a 19-63 record in their first year without him and bring forth Kyrie Irving with the #1 pick out of Duke University. With the 4th pick in that same draft, the Cavs drafted the power forward Tristan Thompson. The Cavs did a little better of the next over the next 2 years, improving to 21-45 in the 2nd year while drafting Dion Waiters from Syracuse with the 4th pick and 24-58 in their 3rd year without James while surprisingly drafting Anthony Bennett from UNLV with the 1st pick. In the 4th year, Cleveland was just 5 games out of a playoff spot in the Eastern Conference and finished with a 33-49 record. They were able to luckily pull out the number 1 pick for a second consecutive season and this one would not disappoint because it turned out to be Andrew Wiggins.

Wiggins has a ton of potential and would be the perfect fit for the Cavs if they were not in their win-now mode. He would learn how to play the small forward position from the best in the game in LeBron James. Cleveland’s front office had other plans however, and Wiggins’ stay in Cleveland didn’t last very long because he was traded to Minnesota in a package deal for Kevin Love along with Anthony Bennett. When LeBron returned to Cleveland this season, he gave us the gift of a brand new, championship caliber team with 3 well-known and proven superstars.

Watching LeBron James play alongside Dwyane Wade and Chris Bosh for the past 4 years has been a really fun experience for basketball fans, but this Cleveland Cavaliers-Miami Heat matchup is already being set up as the highlight of the season so far. And there are still 3 more games in the season series to be played.

Besides the regular season, many teams predicted and would like to see a 7-game playoff series with LeBron and the Cavs taking on Wade and the Heat. Currently, the Cleveland Cavaliers sit at the 5th spot in the Eastern Conference at 17-10 while the Miami Heat at in 7th place at 13-16 in the East. In 25 career regular season games against the Heat, LeBron James has averaged 28.92 points, 7.4 assists, and 6.0 rebounds per game in 7 seasons. The Heat and Cavs however, have never met in the playoffs with James and Wade on their respective teams. This season, LeBron James brought to Cleveland and the NBA the gift of a fierce and respectful NBA rivalry for many years to come.