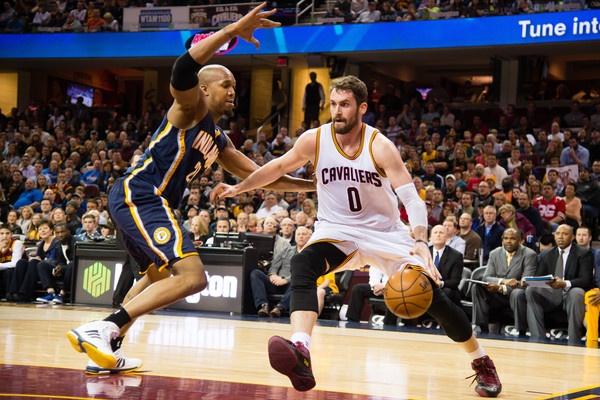 Kevin Love was one of the biggest free agents this offseason, and fortunately for the Cleveland Cavaliers, he chose to stay and settle the unfinished business of winning an NBA championship in Northeast Ohio. There’s no denying that Love is one of the best talents around and he is primed to bounce back after a subpar campaign last year. It’s still a mystery as to how Love will fare next season, especially coming off shoulder surgery, but below are five things that Kevin can improve on for the upcoming 2015-2016 season.

5. Stay Active On The Offensive End

Often times, Love was caught camping out behind the arc. He looked a bit uninvolved on offense, and that happens to be the part of the floor where he excels the most. A lot of this may not be Kevin’s fault. For some reasons, Cleveland never found a way to best incorporate Love into the offense last season. Coming off a career year in Minnesota before going to Cleveland averaging 26 points, 12 rebounds, and four assists, Love saw a major dip in his numbers last year ending up with 16 points and 9 rebounds per game. Even if a play is not drawn up, Love is too good of a player to fall asleep on offense. Outside of his scoring prowess, he is also a very talented passer and he should spend more time on the elbow along with getting more pick-and-pop opportunities. 4. Pound The Rock Inside

Kevin Love is one of the better three point shooters of the Cavaliers. Last season, he hoisted 392 three-balls which was more than Dirk Nowitzki’s attempts. 41% of Kevin’s shot attempts came from behind the 3 point line. While he did shoot the three-ball at 36% this season, which isn’t a bad percentage, there is no reason why he should be shooting more treys than Dirk Nowtizki. With his footwork, soft touch, and post moves, it is a total disservice to both Kevin and the team to use him as a spot-up shooter and, quite frankly, $113 million is a lot to pay for a pick-and-pop shooter. When it comes to scoring at the post, there are few better than Love. If he gets the ball down low, he’ll know what to do. Love was one of the most efficient players in post-ups last year; better than Demarcus Cousins and LaMarcus Aldridge. This will be difficult to pull off with LeBron James dominating the ball, as Chris Bosh went through a similar dilemma with James in Miami, but a solution would be to run the offense through him when LeBron sits down. This will take pressure off Kyrie Irving too and it will also allow Love to flourish inside. Kevin Love is no slouch off the glass as he is a very willing and able rebounder, but he can stand to get stronger on offense and defense. Following a season-ending shoulder injury sustained in the first round of the playoffs, Love dropped his weight down to 238 lbs from about 260 lbs. A leaner Love should be even more crafty around the glass, but it will be interesting to see how this will impact him from a strength perspective. It’s no secret that he will be competing against bigger players and he will need a high level of strength to go along with his finesse. Love should work on going up stronger down low. With the severity of his shoulder injury, it is imperative that he rehabs that shoulder properly before coming back for the 2015-16 season. It’s no secret that Kevin Love and LeBron James are not best friends. That is completely fine but more than once, Love looked uncomfortable and out of the loop with some of his teammates. Kevin doesn’t have to be a social butterfly but it would probably pay dividends to team chemistry if he improves his camaraderie with his teammates. None of us are in the locker room so we have no idea who he talks to, but from the outside, Kevin appears to be a loner. When things didn’t go his way in the game or if he wasn’t getting enough touches, his frustration was obvious. Love has to find a way to be effective, even when he is not getting the ball that often. If Love works on staying positive, he would become an even better fit to the Cavaliers. Defense is no easy challenge but far too many times, Kevin Love was a liability on the that end last year. Love struggled a lot with his lack of commitment and slow feet. This offseason, Love should work on his defensive mechanics, instincts, and drive. He should improve his anticipation and lateral movement. He is no Anderson Varejao when it comes to defense but he has shown the ability to take charges. However, he should still do a better job in using his physicality and making opponents feel him on defense. Love also has to defend the pick-and-roll better. If he is going to switch off to defending the guard, Love has to improve his footwork and a lighter frame, should help him in that aspect. His defense has been a career deficiency but with a commitment to getting better, I trust that Love can be a solid defender down low. With this improvement Love should prove to be worth every penny of that 113 million dollar contract.