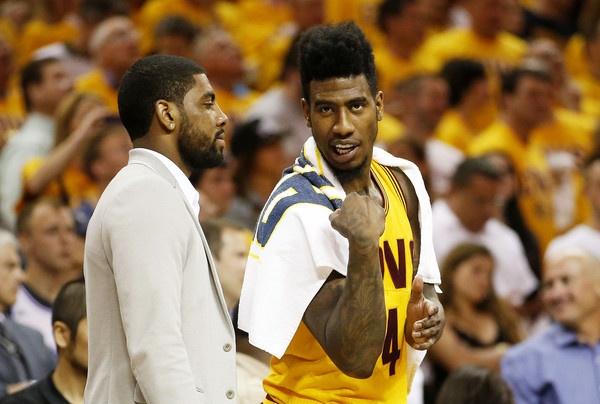 Iman Shumpert was traded along with New York Knicks’ teammate J.R. Smith on January 5th, 2015. The trade moved Shumpert from a bottom feeding Knicks team to a sudden championship contender. Although he didn’t play immediately after being traded due to his recovery from a dislocated shoulder, Iman Shumpert played in 38 games for the Cavs and averaged 7.8 points, 3.8 rebounds, and 1.5 assists per game. Shumpert is a long athletic wing who can really defend and score when healthy. However, that’s not to say that there isn’t parts of his game he can still improve. Here are five areas of Shumpert’s game that he can improve on to become a better NBA player next season.

Iman Shumpert has developed into one of the premier defenders in the league and he’s only 25 years old.. There will be some nights when Coach David Blatt will call on Iman to be the ball-stopper that he is. He is a long, athletic wing who can flat out defend. Just look at what he did to Stephen Curry in parts of the Finals and Klay Thompson in basically the whole Finals’ series! If he continues to improve on the defensive end and remain coachable the sky is the limit for Shumpert defensively.

Click “Next” to see the fourth part of Shumpert’s game he can improve next season!

4. Give The Rap Career A Rest

There has been a lot of NBA players that have tried their hand at hip-hop and they are just not to good. He is not a bad rapper, but if Shumpert wants to take his overall game to the next level, he’ll need to put the microphone down and focus on his basketball career. He also has a 4 year, $40 million dollar contract that he needs to live up to.

Click “Next” to see the third part of Shumpert’s game he can improve next season!

This is not to say that Iman Shumpert is not in shape, but he can definitely improve and get stronger. Since he is playing with LeBron James now, this should be able to be accomplished pretty easily. LeBron James is one of the most conditioned athletes in the world who always comes into the season in better shape. Kevin Love has also improved his body and come in more lean every year as well.

Here is a workout he could emulate. LeBron James working hard:

Instead of KD this can be LeBron and Iman.

Click “Next” to see the second part of Shumpert’s game he can improve next season! Shumpert definitely has to work on his mid-range jumpshot. He was exposed in the NBA Finals. The Golden State Warriors were leaving him wide open for mid-range shots and he was missing a large majority of them. If he can improve this area of his game he gives the Cavaliers another valuable scoring weapon. He was left wide open in the NBA Finals so many times and missed. If he knocks down more of those mid-range jumpshots he missed we may be looking at a different outcome in the series.

Click “Next” to see the number one part of Shumpert’s game he can improve next season!

Iman Shumpert can definitely improve his ball handling. He has the build and the athleticism to where if he improved this area of his game he would be an extremely dangerous weapon. David Griffin knew what he was doing when he brought Shumpert to Cleveland. He is not a bad ball handler now but with improvement in the ball handling department he could be called on for some point guard duty in the future.

Check out of this video of Iman Shumpert working on his ball handling in this cool Two-Ball drill: