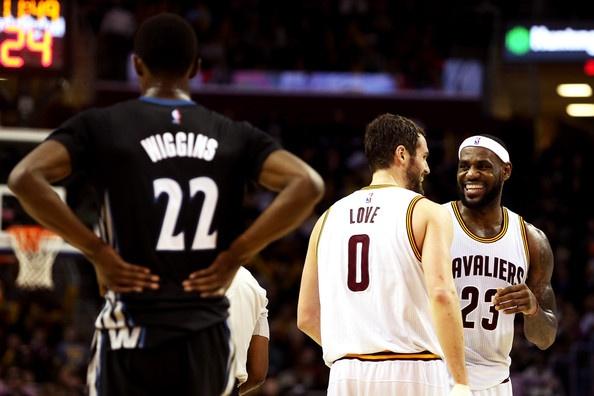 Kevin Love hasn’t had the easiest time fitting in with the Cavaliers this season. It was his first time in a winning atmosphere, so it was overlooked at times because its always team success over individual success. Throughout the season, Love has never once mentioned himself in another destination, saying he plans to remain a Cavalier beyond this year. The Cavs and fans better hope he sticks to his words, because Cleveland will need Love if they plan to win a championship.

5. Relieves pressure off of LeBron

When Love and Kyrie were not on the floor for the 2015 playoffs, LeBron James was feeling the defensive pressure from other teams especially in the finals vs the Warriors. Andre Igoudala and sometimes Andrew Bogut and Festus Ezeli would double team LeBron. If Kevin Love is on the court for the Cavaliers next year, opposing big men will be forced to respect Love’s down low presence and it will in turn relieve some of that defensive pressure the King has to deal with

Click “next” to see the fourth reason Cleveland needs Love When the Cavaliers went with the line-up in the finals that consisted of Delly, Iman Shumpert, LeBron, Tristan Thompson and Mozgov they found it difficult to spread the floor. Kevin Love gives the Cavaliers that ability to space the floor with one of their big men creating more space for Tristan and Mozgov to work offensively on the low block, and it also creates more space for the likes of LeBron and Shumpert who are excellent at slashing towards the basket for 2 points. Without Love next season, his ability to space the floor will make the low block very congested for the Cavaliers

Click “next” to see the third reason Cleveland needs Love It’s no secret that Kevin Love is a top caliber three point shooter in the NBA. He won the three point shooting contest in 2012, and is consistently amongst the top 5 big men in the NBA when it comes to three point percentage. Pundits and critics alike will say that the Cavaliers already have Kyrie Irving, JR Smith, James Jones, and Mike Miller as their 3 point players, but the futures of Smith, Jones, and Miller are all being put into question because of the Cavaliers cap struggles for the next season. If the Cavaliers lose Love and even 1 or 2 of those 3 point specialists, their 3 point game will severely suffer.

Click “next” to see the second reason Cleveland needs Love Kevin Love is one of the best rebounders in the entire game and he would be an asset on every team. Now, the emergence of Tristan Thompson has put Love’s future with the Cavs into question but I can assure you that Love is a more valuable piece than Tristan right now. Tristan made opposing teams suffer on the glass but his offensive drawbacks are too much of a question mark for the Cavaliers to seriously consider paying Thompson over Love. Thompson is a good player in the NBA, but Love is elite and just because one postseason showcases Tristan’s rebounding skills does not mean that an All-Star and Elite player like Love should be criticized when he only played in 4 postseason games.

Click “next” to see the final reason Cleveland needs Love Kevin Love is an NBA All-Star caliber player. The Cavs have the big three for a reason, because when Miami went into the finals with Bosh, Wade, and LeBron they came out champions, and when the Spurs old trio of Parker, Duncan, and Manu were put to the test vs the Heat they were victorious. The Cavaliers should learn from their predecessors and understand that their big 3 can achieve great things in time and when LeBron, Love, and Kyrie are healthy that they are the best triple threat in the league. Kevin Love’s numbers may have been down this season, but playing with 2 other elite players will always mean a sacrifice in numbers. If the Cavs let go of Kevin Love this offseason, they will be letting go of one of the elite premier players in the NBA.