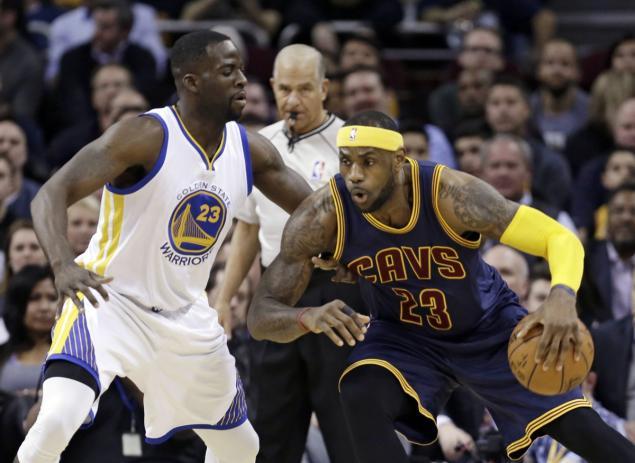 The anticipation builds up as we await the start of the NBA Finals matchup between two title hungry franchises in the Cleveland Cavaliers and Golden State Warriors. Aside from being the best regular season team this year, the Warriors have also managed to stay relatively healthy during the playoffs but the injury-plagued Cavaliers are not to be dismissed at all as they seem to improve in every series they step into. For the first time, Cleveland will be entering a matchup as the underdogs, don’t tell that to LeBron James, but the title hopes are very much alive and we further support that as we identify five major reasons why the Cavaliers will prevail over the Warriors.

5 – LeBron James Is In Playoff Mode

Stephen Curry was the regular season MVP because LeBron James allowed him to; not to take any credit away from Curry but James could win MVP every year if he wanted. He knew very well that he just needs to cruise through the 82-game grind to prepare his body for the playoffs and we are now witnessing how a full engaged LeBron James dominates when the lights shine brightest. After 14 playoff games, James is averaging 27.6 points, 10.4 rebounds, 8.3 assists, 1.8 steals, and 1.3 blocks and he is picking up the pace day by day as evidenced by his mind blowing East Finals numbers (30.3 points, 11.0 rebounds, 9.3 assists). Defense wins championship but you still need to put the ball in the hoop. It takes a high level of efficiency and excellence on both ends of the court to make a true claim to the ring. The Cavaliers have proven capable of that as they went from having an elite offense into being the best defensive team in the playoffs. To perfectly highlight the Cavs’ stronghold of that area, they now enjoy the best Net Rating (10.1) of all teams in the playoffs with the Warriors (8.4) far behind at number two. Furthermore, Cleveland is the antithesis of Golden State. The Warriors love to hoist them up as they are the best jump shooting team in the league but in these playoffs the Cavaliers are tops when it comes to opponent three point percentage limiting foes to a miserable 28.1% mark. The Warriors may have the deeper lineup but they have zero experience at the biggest stage. On the other hand, Cleveland is teeming with championship pedigree as LeBron James, Mike Miller, James Jones, Shawn Marion, Brendan Haywood, and Kendrick Perkins all have at least one title on their belt. Majority of that bunch may not see significant court time but their mere presence helps a lot as they will be able to set the tone of the team and provide much needed advice to their younger brothers. 2 – Taking Care Of The Ball

Every possession counts in the playoffs and they get magnified even more entering the finals. One basket off a turnover could sway the tide and affect the outcome of the game which could ultimately decide the series score. During the playoffs, Cleveland has been taking care of the ball way better than Golden State as the former averages 12.3 miscues per game compared to the latter’s 15.3. History even sides with the more cautious team as the last franchise that won a title despite averaging more than 14 turnovers in the playoffs was the 2006 Miami Heat. With Cleveland’s defense gaining more teeth by the day, expect that gap in the turnover numbers to widen. Kyrie Irving may have been limited on defense with his ailing knee but the days of rest should significantly work in his favor. Although we shouldn’t expect Irving to be 100% in Game One, he should have more confidence on his body and it will only make him more lethal on offense. That particular area is where he’s expected to inflict the most damage on Curry as the regular season MVP has not yet faced a real challenge defensively in these playoffs. The point guards whom Curry has had the privilege of defending are rusty Jrue Holiday, injured Mike Conley, and old Jason Terry. Kyrie Irving, despite the injuries, presents a whole new level of challenge to Curry’s defense.