The only way that NBA coaches have been able to keep LeBron James in check is double teaming him and forcing him to make his teammates make plays. That was part of the reason he skipped town in the first place, his teammates in his last playoff push in Cleveland simply weren’t capable of being the best in the NBA.

In Miami teams still double-teamed LeBron, and he went to four consecutive NBA Finals’, winning two. Now back in Cleveland, standing next to Kyrie Irving and Kevin Love, teams would be unwise to double-team anyone on the offensive end for Cleveland. Love provides Cleveland with such a huge advantage, keeping multiple defenders off of his fellow superstars.

Love is basically Chris Bosh if Chris Bosh had a better post game and was a great offensive rebounder. This is a very scary proposition for the rest of the NBA, and that’s even before you get to Kyrie Irving. Cleveland are second in the league to the GSW in first quarter scoring average, putting up 28.2 points to start the game every night. 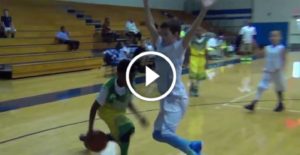