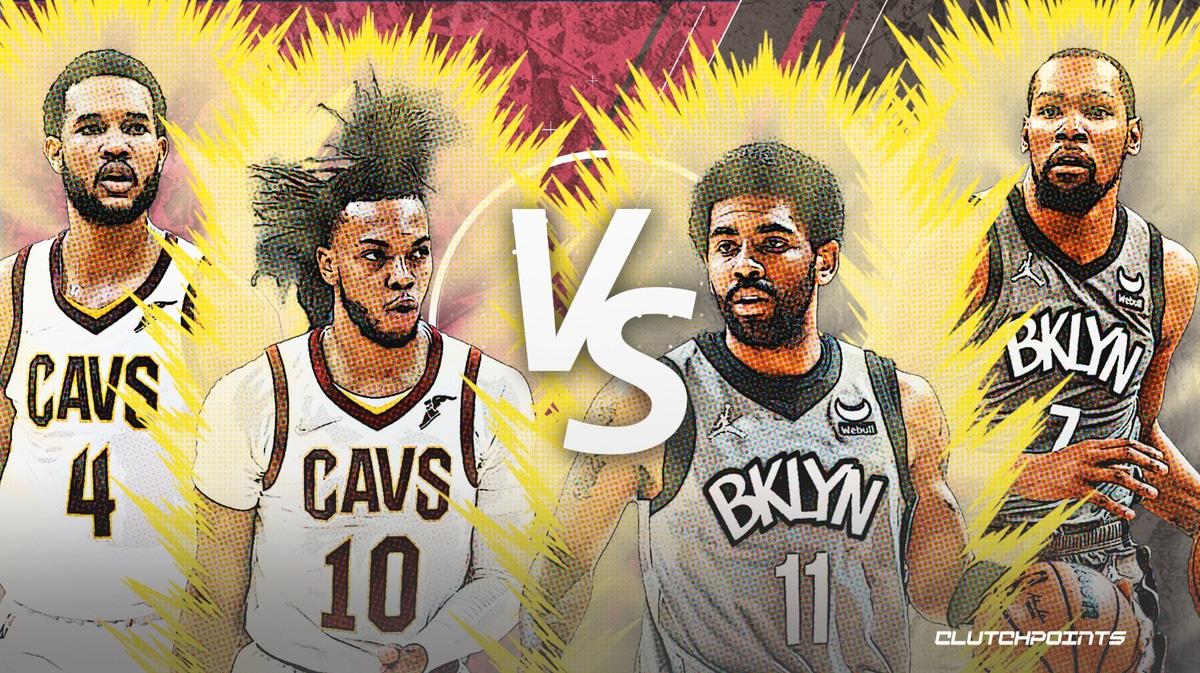 The Cleveland Cavaliers have made it to the postseason. Ready for the crazy part? LeBron James isn’t on the Cavaliers. The Cavs are playing beyond the regular season without their homegrown superstar for the first time in 24 years. And it will be the first of many. This young core is going places.

Injuries tripped up a squad that was not too long ago a top two seed in the East. They slipped all the way to the play-in, but considering how vastly the team exceeded expectations earlier on in the season, there’s nothing to be disappointed in. Darius Garland, Jarrett Allen, and Evan Mobley stepped up in big ways to establish the fact that Cleveland is home to one of the brightest futures in the NBA.

Right now, the present is staring them in the face, though. The Cavs face a daunting task of overcoming the star-studded Brooklyn Nets for a first-round date with the Boston Celtics. A loss puts them on the brink of elimination and in a must-win situation to stay alive another day.

The Nets are a shock to find in the play-in, given the top end talent that this team possesses. Kevin Durant and Kyrie Irving headline a unique roster, but one that can do a lot of damage in a hurry. The Cavaliers will have to execute at the best of their abilities in order to steal a win in this one. It all starts with their best player.

Darius Garland is the offensive engine for the Cavs. The all-star leap he took this season was necessary for the team to take the leap that they did this season. For a defensive-minded team, Garland put his teammates on his shoulders on the other end of the floor.

Darius Garland scored or assisted on 17 straight Field Goals for the Cavaliers tonight.

A stretch of just under 17 minutes from midway through the 2nd through the end of the 3rd.

They started the run with 35 points. Ended it with 79. pic.twitter.com/Eg7cJstN7K

Darius’s fingerprint needs to be all-over the game for a victory. Getting to the paint, knocking down his jumpers, getting his teammates involved, etc. Bruce Brown will likely draw the assignment of being his primary defender. He’s no slouch on that end, so being able to shake him will be paramount. Perhaps deferring to Caris LeVert at times will be necessary.

Not having Jarrett Allen available is a big loss for this team, but specifically DG. The synergy that those two developed over the course of the season was incredible, and at times, dominant. Allen makes Garland better. Not having the overwhelming screen-and-roll threat that Jarrett is alongside him is certainly a negative. One player specifically will be asked to pick up a lot of the slack.

Evan Mobley is an extraordinary talent. The potential rookie-of-the-year is able to do things that very, very few bigs could even dream of doing. At 7-feet tall, he claims a tantalizing combination of skill, smarts, and athleticism. Despite his dynamic skillset, there are certain things he can’t do, that your typical role-player 5-man would be able to do.

Mobley shouldn’t struggle with Drummond 1-on-1 against the Nets. Although Dre’s much stronger, his touch is pretty poor and Mobley’s length will be sure to bother him, even if he gets knocked out of position. pic.twitter.com/n0xpFTA5r7

A key to unlocking Darius Garland’s game is having that big-man next to him who can set a good screen on his defender and help him get a step or two on his man. Garland struggles to create that separation heading towards the basket himself, so he need some assistance. Mobley’s thin frame and inexperience grades him out as a very poor screener. A simple, but important attribute.

Even if he’s able to force the slightest bit of contact with the perimeter defender, it would be useful. His vertical pop, reach, floater, and passing vision make him a strong roll-threat when he can help the ball-handler get that momentum going towards the rim.

Evan Mobley, along with inside-out threats Kevin Love and Lauri Markkanen will have to play a large role in a potential Cavs victory. This team has relied on their big-men a ton this season. Jarrett Allen missing doesn’t stop that position group from being a strength for Cleveland in this matchup.

Kyrie Irving isn’t the only recent Cavalier playing for this Brooklyn team. Andre Drummond starts for the Nets, and he’ll be sure to give the Cavs some issues if they don’t game plan for him. He’s not so much a threat to score against Evan Mobley and company, but keeping him off the offensive glass will be paramount. Boxing out him and any other pesky Nets will be key to a victory.

Gonna need to be an emphasis put on the glass against Brooklyn for the Cavs. Drummond is obviously a titan on the boards and Bruce Brown is very pesky and opportunistic. Gotta box out, can’t afford any easily-preventable second chances for this Nets offense. pic.twitter.com/uuWtGZypIx

Offensively, Mobley, Love, and Markkanen can do a lot of damage from outside the paint, but JB Bickerstaff will need a strong effort from them down low. The Nets are a small team that will often times be playing three guards at the same time. Whenever one of those Cavalier big men get a mismatch in the paint, the perimeter guys will need to get them the ball. Any advantage Cleveland can generate will help their offense get off the ground.

The Nets run a guard-heavy rotation (Kyrie, Curry, Brown, Dragic, Mills). The Cavs play a lot of skilled bigs. Whenever they can get a mismatch down low, it’ll be imperative for Cleveland to capitalize on that.

Love the first clip of Mobley doing it himself. pic.twitter.com/bpoS3Kj6sn

Koby Altman’s trade deadline acquisition has had an up-and-down stay with the wine and gold so far, but there’s reason for optimism with him in a playoff environment. Caris LeVert is beginning to settle in with the team at just the right moment and the Cavs could certainly use it.

LeVert gives the team a shot of extra scoring, ball-handling, and passing that the team sorely lacks outside of Darius Garland. With him playing big minutes and the amount of offensive talent that Brooklyn possesses, Cleveland will need him to raise his level of engagement and activity on both ends of the floor, especially defense. He can be a good defender when he’s locked in.

This is the sequence for Caris that we’ll hopefully see more of in the postseason:

The energy and effort while defending Kyrie.

Finding the guy crashing the rim and boxing him out.

Pushing the pace and drawing the foul. pic.twitter.com/fETx2qDy8m

With Bruce Brown marking Garland, Kevin Durant roaming, and Andre Drummond sitting in the paint, that leaves Kyrie Irving and Seth Curry as the guys who will be primarily tasked with guarding Caris LeVert. He should see those two as food. The Cavs will need an aggressive Caris, but at the same time, one who doesn’t activate tunnel vision and ends up forcing too many looks.

With the Nets having Bruce Brown guard Caris LeVert, that means Seth Curry and Kyrie will be defending Caris LeVert for a good amount of time. Gonna need him to be aggressive attacking the basket when he has that matchup pic.twitter.com/wQ1O9rGTmT

With their best defender out, the Cavs have the opportunity to face two of the best offensive talents the NBA has ever seen. Hooray. There is no obvious blueprint to stopping Kevin Durant and Kyrie Irving. They’re going to get their numbers. But you can attempt to limit them from taking over.

With KD’s touch, vision, and length, it’s so incredibly hard to prevent him from getting to his spots and taking the shots that he wants to. You’re kind of forced to let him play his game. Durant doesn’t often take it all the way to the rim, and that’s something you can use against him. Defenders will have to play up tight on him and just give him minimal room to get his shot off and hope he doesn’t drive by them. Being as tall as he is does have negative side-effects when it comes to his handle and dribbling through traffic.

Would advise against doubling Durant. KD takes it all the way to the basket much less than your typical star. He’s just gonna shoot or pass over you anyways, most of the time.

His teammates are predominantly smart off-ball movers and passers, as well as good shooters. pic.twitter.com/JfqvuiDRZG

Kyrie is the enigma. Quite like KD, there’s not much you can do with this guy. His crafty handle and movement skills get him wherever on the floor he wants to go. Isaac Okoro will have to be physical with Irving. The important thing is not letting him get to the cup. Let him take the more difficult shots. Both Kyrie and the Cavs know he can make those, but they won’t be as efficient as if he were to get into the paint.

The Cavs pretty much ignored Bruce Brown offensively the last time they played the Nets, allowing the guy marking him to cheat off and plug driving lanes for KD and Kyrie rather effectively.

He’s shooting 40% from three this year, but on only one attempt per game. pic.twitter.com/3IZkLVOGok