5 Keys For Cavs To Defeat Pacers Without LeBron, Kyrie 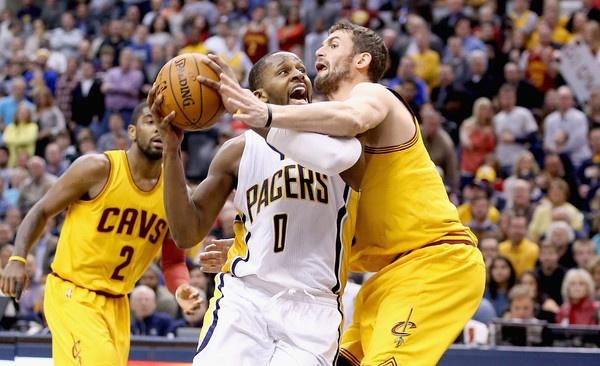 Cleveland will be playing without its two all stars tonight as Kyrie Irving is out with a shoulder strain from last night’s game and LeBron James will sit out with back soreness. Here are five keys for the Cavs to beat Indiana tonight, starting with number five:

The stats show where the Cavs are most successful. Cleveland is 27-3 when shooting at least 45% from the field, and 10-19 when shooting below that 45% mark, so it will be key for Cleveland to move the ball around and get good looks at the basket. With James and Irving out, look to Kevin Love, J.R. Smith, and Timofey Mozgov to carry the scoring load tonight.

Click “Next” to see the fourth most important key for the Cavs!

The Cavaliers are 27-10 when getting at least 20 assists and 10-20 when they get less than 20. In their last game against the Warriors, Cleveland had just 15 assists but still won because of the lights out shooting from LeBron. With James and Irving out, it will be important for Cleveland to move the ball from side to side and inside-out to open up some looks for the shooters and low post guys.

Click “Next” to see the third most important key for the Cavs!

Indiana can be a foul prone team when frustrated, so getting on them from the opening tip will help open up everything offensively. Love and Smith have to be extra aggressive going to the basket to draw fouls on Hibbert and West. That will open up scoring options from the three-point line.

Click “Next” to see the second most important key for the Cavs!

C.J. Miles had a big game with 26 points last time these teams played, a loss which ended the Cavs 12 game winning streak. Cleveland had the game won until Miles got hot along with the strong physical play of Solomon Hill. The Cavs will have to keep Miles and the shooters off the perimeter, force everything to the baseline or free-throw line where the Cavalier help defenders will be.

Click “Next” to see the most important key for the Cavs!

Kevin Love should be the absolute go-to guy this game with James and Irving both out. This is Kevin Love’s chance to get into a good rhythm from the opening tip and carry the Cavs offensively whether it be from the three-point line or from the low post. If Cleveland focuses on getting the ball to Love, expect him to have a huge game tonight.