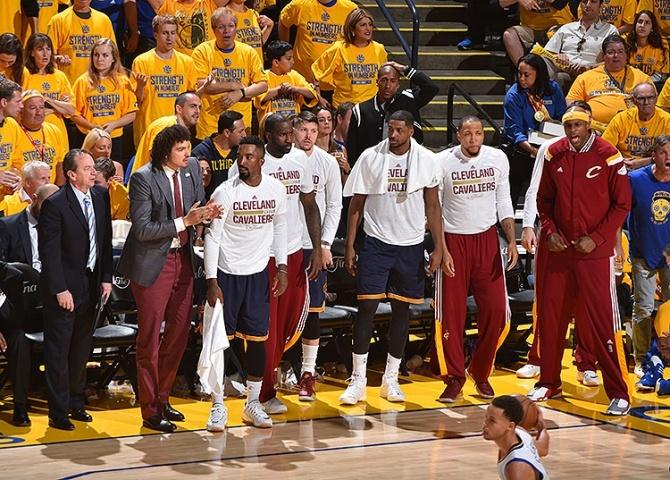 The Cleveland Cavaliers fell in Game 5 of the NBA Finals and are now on the brink of elimination with Game 6 back at home on Tuesday night. This series, with the exception of Game 4, has been relatively close. The Cavs just got away from their game plan and ran out of gas. J.R. Smith, Iman Shumpert, and Matthew Dellavedova combined to shoot 7-35 from the field, including 3-22 from downtown in that blowout fourth game. Clearly, some of these Cavs have to step up their game if Cleveland has any hope of winning a championship. Here are the top five players who have to step up their game, starting with number five:

With Kyrie’s season ending in Game 1 due to a fractured kneecap, the torch has been passed to Matthew Dellavedova. Delly has come up big throughout the playoffs, but the Finals have put him to the ultimate test. After having a phenomenal Game 3, Delly wasn’t as hot in Game 4, only shooting 2-12 from the field and 0-8 from beyond the arc. With no Kyrie, Delly has one of the most important roles on the Cavs now, and he needs to continue to perform like he did in Game 3 in order to take the series. Shump hasn’t had the best Finals appearance. While starting all 4 games he has only contributed 21 points for the Cavs. Through 4 games he is only shooting 7 of 28 and 5 of 16 from 3 point land. However, on the other end of the court, Shump is proving that he’s an elite defender, as he’s been able to use his quickness to stop Klay Thompson for the most part and accumulating 10 steals. For the Cavs to win though, Shump needs to get out of the slump and shoot a bit better to give the Cavs an offensive boost. Speaking of shooting slumps…there’s J.R. Smith. Smith continues to come off the bench in a solid 6th man role, but he’s struggling with his stroke. Smith is only averaging 9 ppg in the Finals, compared to 18 per game in the conference Finals. Against the Hawks, Smith shot 26 of 52 (50%) from the field and 16 of 34 (47%) from downtown in a four game sweep. Through 4 against the warriors, Smith is only shooting 14 of 47 (30%) and 7 of 28 (25%) from deep. To give the Cavs hopes of winning, J.R. needs to find that sweet stroke of his and give the Cavs some much needed bench points.

A lot of controversy surrounding bench player usage revolves around David Blatt’s decisions. With two overtime games to start the season as well as heavy minutes on starters, Blatt’s minimal use of the bench is a questionable topic. LeBron is carrying the heaviest load, averaging 46 minutes per game. Tristan Thompson is averaging 42 minutes per game, up from 27 in the regular season. Shump is doing 35.3 mpg compared to his 26 regular season mpg. And with Kyrie out, Delly is now averaging 31 mpg compared to his regular season of 23 mpg. All of these extra minutes are causing extra wear and tear, as shown by pure exhaustion and Delly having to be hospitalized for dehydration. If Blatt could find a way to get some starters just a few minutes more rest by putting in bench players like James Jones and giving Mozgov a few more minutes, the starters would have more energy and be able to compete at a higher level. The man under the most scrutiny this postseason has to be the King. The only reason I am saying LeBron needs to “step up” is that he is held to such a high standard and he is performing slightly below that level. First off, LeBron is putting up incredible numbers, averaging nearly a triple double with 36 ppg, 12 rpg, and 8.25 apg while only committing 3.25 turnovers per game. And yes, LeBron scored 123 points in the first three games of the Finals, the most ever by a player. The only part of LeBron’s performance that he needs to step up is efficient shooting and shot selection. In the first 3 games, LeBron took 107 shots, and came away with 43 baskets. Through 4 games, LeBron is shooting 50 of 129, and average of 32 shots per game and making 12.5 (39%). Keep in mind that LeBron was only shooting 18.5 shots per game in the regular season and hitting 9 per game (49%). After Game 3, James was interviewed by former teammate D Wade and said that taking that many shots was out of character but he would do what was needed. LeBron said he also aimed to hit 50% from the field. Granted, LeBron is having an incredible Finals run, but if he could pick up his shooting and drive more for higher percentage shots, he could give the Cavs the boost they need. Hypothetically, if LeBron had shot 50% thus far, he would be ~65/129 instead of 50. Those extra 15 baskets translating to 30 extra points would be huge for the Cavs. In a series where the Cavs are being outscored 395 (98.75 ppg) to 373 (93.25 ppg), and extra 30 points would give them the edge in the series.