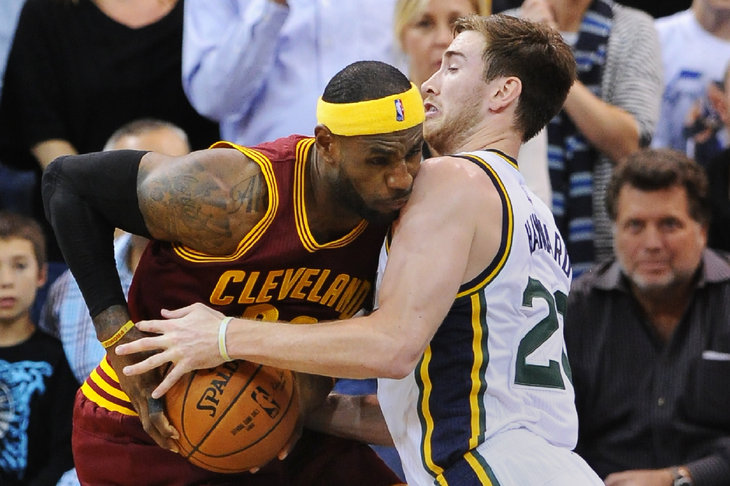 The Cavs came out of their western road trip with a win to end a small losing streak. Now 3-3, the Cavs are .500 against Western Conference thus far. The Cavs fell to Portland and Utah but were able to overcome Denver and New Orleans. This shouldn’t come as a huge surprise as the Cavs couldn’t pick up a win against a western team in the preseason, and the team building process is bound to take more than a couple of games. The Cavs record against western teams, including the preseason, is 2-4, compared to a far more impressive 4-1 against the East. Why the difference? The answer to that question is a bit complicated, but can be summarized in 4 reasons. Start with reason #1 on the next page! Rebounding plagued the Cavs in their Western road trip. Interestingly enough, in the preseason, the Cavs were outrebounded in both of their Western games, the Mavericks and Grizzlies, by at least seven rebounds. Having an advantage on the board is crucial to controlling game pace, fueling the transition game and limiting second chance opportunities for opposition while creating them for our offense. Rebounds are a good indicator of winning basketball games. An advantage of five is usually enough to ensure a W and an advantage of ten nearly guarantees a win. While, contrary to the usual trend, the Cavs were unable to pick up those preseason victories despite holding a strong advantage on the boards. In the regular season that trend has, to the Cavs’ chagrin, proven true. In their two Western wins, the Cavs matched the Nuggets’ 42 rebounds bested the big frontcourt of New Orleans by five rebounds. In their losses, the Trail Blazers outrebounded the Cavs by a margin of seven, and the Jazz by 11. This advantage on the boards is not only a consequence of the overall quality of big men in the Western Conference, but sometimes a consequence of the occasionally lackluster effort shown on the boards by the Cavs’ bigs. Before the Nuggets game, the Cavaliers’ bench scoring for the 2014-2015 season was the worst in league. The Cavs averaged only 17.5 bench points per game. After the game, Cavs are ranked 18th, averaging a more reasonable 30.8 points per contest. While these early season statistics fluctuate, this upward trend is a good sign, but it needs to improve further and cannot be hindered by rotations. In Utah, coach David Blatt only played eight players. The three off the bench, Mike Miller, Thompson and Dion Waiters, managed to score 13 points and the starts the other 87. Waiters, usually playing in the mid twenty minutes range, played only 13:14. The Jazz, on the other hand, played 10 men. The five off the bench managed to score 25. Last season, of the top five teams for bench scoring, only one (Brooklyn) was from the East. The other four were from the West and averaged about 40 points. If the Cavs are going to win games consistently, especially against the West, the bench is going to need to make a consistent impact.

Lastly, the Cavalier’s assist numbers shed light on the lack of success experienced so far in the West. Before their redemptive performance against the New Orleans Pelicans, the Cavs were ranked second worst team by assists averaging only 17.8 assists per contest and only 14.1% of the Cavs’ possessions featured assists, the 2nd worst ratio in the NBA. In Utah, the team only had six assists, tying a franchise low. Kyrie Irving didn’t have a single assist and LeBron had the most assists for the Cavs that night with four. This problem boils down to a lack of team chemistry, which hasn’t been apparent because teammates need to take up new roles, adapt to a new coach and strategy and actually have enough time to grow and develop together. We saw that theory of team chemistry start to surface with the Cavs’ latest game at home against the Pelicans, where, contrary to all prior games, the Cavs offense seemed unstoppable and Irving nearly recorded double-digit assists (9). Now time will further tell us how well the Cavs can share the ball and play as a team.

These are serious issues that explain why the Cavs have struggled against the West. The question is how serious, and how can the Cavs adjust? Find out on the final page:

Should we be worried in the West? No. The bottom line is this: our early season blues are a result of a lack in team chemistry. Every now and again we see glimpses. Whether it’s something as simple as Irving and Love executing the pick and roll, or something as exciting as LeBron’s half-court to pass Thompson for an alley-oop, it cannot be denied that progress is being made. With each games and each practice, the Cavs will come together more as team. It’s not a matter of if, but a matter of when.