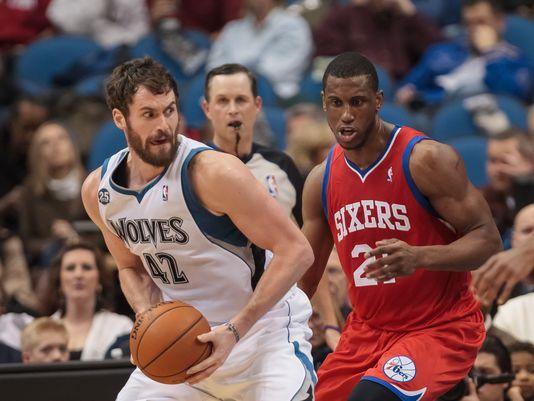 There is a lot of speculation and rumors going around that the Minnesota Timberwolves are close to a trade agreement, which would send superstar Kevin Love to the Cavs. Over the past few weeks there has been discussion on which pieces would be included in this trade to make it work for both sides. It seems now however, there is a third team that has slid into the mix. The Minnesota Timberwolves have expressed interest in finding Love’s replacement and it appears the Philadelphia 76ers have that guy. The Wolves are showing interest in getting the 76ers involved in a deal that would give them power forward Thaddeus Young.

Only time will tell if Philadelphia is intrigued by this offer. Thaddeus Young has 2 years left on his contract with the 2015-2016 season having a player option. The contract Young would carry into both seasons is $19.3 million. It is hard to say whether or not this trade will go down as a 3-way deal or if the Timberwolves and 76ers will work a side deal once Love is dealt. This would definitely help the Cavaliers make a stronger push with what they have to offer and Minnesota would be gaining assets from both teams.

Given the scenario let’s say that the teams do agree to a 3-way deal. Each team would be making out with exactly what they need.

Minnesota would add on an up and coming star in Andrew Wiggins; this kid has more upside than any draft pick we have seen in years. Seeing that they would be losing Kevin Love it is obvious why they would want to find a person that could at least step in and be a starter for them this coming season. That is exactly what they are getting in Thaddeus Young.

The 76ers would be able to get trade value for the only veteran player left on their team. With a player option coming up and Philadelphia not showing any signs of winning anytime soon, I would be safe to assume that Young would take the option to leave while he had a chance. The 76ers will be able to clear some cap room and have space to build around Nerlens Noel, Carter-Williams, and Joel Embid. Plus the 76ers will obviously be receiving some players with some potential in a trade of this capacity.

The Cavaliers may seem like they are giving up a lot of what they have been given over the past few seasons. While this may be a point of view that some have, the mind of the Cav’s front office is in a different place. By dealing some of their young talent, they will be able to receive a player that gives Cleveland a better chance to win now. Kevin Love, Kyrie Irving and LeBron James on the same team almost seems like it is too good to be true. The trio would be able to cover almost all aspects of the game. Dominant ball skills, passing, shooting the ball from the outside, being able to post up, playing the pick and roll, rebounding on both ends of the floor, proven defense, and throwing down some fancy dunks. To be honest, this would probably be the best big 3 that has played together in the history of the league.

With all of that being said we know that there are going to be some other pieces moving around that have not been discussed. Here is what I think everyone will end up with if a 3-way trade between the Cavs – Wolves – 76ers does happen:

While it may seem that the Cavaliers are giving up a lot in 2 future 1st round picks, Waiters, Wiggins, and Bennett, along with moving small cap space in Lucas and Thomas, this is what it will take for them to land a superstar like Kevin Love. Also, with gaining Corey Brewer, it gives the Cavs some extra depth and a veteran player to have on the team.

{adinserter 2} Minnesota fans should be ecstatic about this trade if it happens. They get rid of a player who really doesn’t want to be there in Love and they receive Young who is not quite as talented as Love but who can come in and start in the place of Love. Wiggins is definitely the show stopper that they are adding. By adding Wiggins and Bennett, you are taking two developing stars and putting them in a leadership role. This will quickly advance both of their development and give them a leadership role on their new team, something Cleveland cannot offer them as of now. Minnesota also just signed Mo Williams, which opens up the possibility of getting JJ Barea off of their roster.

Philadelphia is a young team with a lot to prove and will be gaining Dion Waiters. Waiters is another young player out to prove that he is valuable of a starting position. Why not throw him on a team with the same purpose and goal? It makes sense. The other players’ deals that they would be acquiring in this potential trade are basically nonexistent, either expiring or nonguaranteed.

I am hoping we have more light shed on this situation going forward but it does seem that all parties are taking these talks more seriously and we are closer to seeing this deal get agreed upon. Remember Wiggins cannot be moved for 30 days since the signing of his contract last week. I still think all parties will come to the terms of this deal over the next few days. It will be interesting to see where this story goes!