The Cleveland Cavaliers haven’t played a game since March 10th, which means the front office has had plenty of time to plot out a course of action for this past offseason. The team was not very busy in the free agency or trade markets, but that was to be expected given where the Cavs are in their rebuild. Still, there were some potential moves that Cleveland could have benefitted from, and here are three of them.

The Cavs ended up making three first-round selections in the 2019 NBA Draft, adding Darius Garland, Dylan Windler, and Kevin Porter Jr. The Cavaliers again held the fifth overall pick in 2020 but ended the draft making just one pick in Auburn forward Isaac Okoro. It would have been nice to see the team make a move to add at least one other pick, whether by sending future second-round selections, cash considerations, or players on the roster. Prospects like Cassius Stanley, Xavier Tilman, Vernon Carey, and Jaden McDaniels fell further than expected, and all seemed like the type of talent that the Cavs would have benefitted from adding.

Still, without a surefire franchise cornerstone, the Cavaliers should be buying as many Porter Jr.-type lottery tickets as they can. That mindset should continue until the roster has at minimum one franchise player and plenty of talent around him at all positions. Adding players like Porter Jr. who may need a year or two to adjust before they being to reach their potential, may be the only way the Cavaliers will be able to climb out of mediocrity; the new lottery odds have stunted the rebuild, and Cleveland, as beautiful as it can be during the winter, is not exactly a premier free agency destination these days.

Trading back into the draft for a player like McDaniels made all the more sense because the Cavaliers lack any sort of young frontcourt talent. In fact, their youngest frontcourt member is currently rookie two-way player Lamar Stevens, who is four months older than Thon Maker, who is entering his fifth season in the league. There just isn’t a lot to look forward to in that room, and with Andre Drummond likely to be traded this season, and Kevin Love’s name constantly mentioned in trade rumors, that cupboard could be even emptier by the season’s end. The Cavs certainly know this, and perhaps the plan is to begin adding young frontcourt talent next offseason.

USC’s Evan Mobley appears to be a franchise-caliber player, but so do Cade Cunningham, Jalen Suggs, and Jalen Green (among others), all of whom are guards. Cleveland should absolutely still be in best player available mode in the draft, but at some point, you can’t continue to pile up young guards who need playing time. There are five positions to fill on the floor, and right now the Cavs have no one to fill  power forward or center long-term. McDaniels was especially intriguing pre-draft given his frame (6-10 200 pounds) and offensive ceiling. His athleticism and ball-handling potential at his size is the kind of raw talent that the Cavs are in the perfect position to develop.

One way the team could have added some frontcourt talent is by trading for Myles Turner of the Indiana Pacers. As free agency opened last month, there were rumors that the Pacers wanted to add Gordon Hayward, and were willing to send Turner to the Boston Celtics in a sign-and-trade. Hayward is a fine player, but perhaps not the kind worth $120 million over four years, which is what he was given by the Charlotte Hornets. If Turner is available, then the Cavaliers should be very, very interested. Turner won’t turn 25 until next March, is under contract through 2022-2023 at $18 million per year (or over $10 million less than what Drummond makes this season) and is close to the modern center prototype.

He’s a 6-11 250-pound rim protector who provides legitimate floor spacing on offense. He isn’t a dominant scorer, but he’s a terrific complementary option. He’s also a better defender than Drummond, although he doesn’t put up the same eye-popping rebound numbers.

A trade centered around Drummond’s expiring contract and/or Milwaukee’s 2022 first-r0und pick (with reasonable protections, of course) would make plenty of sense for Cleveland. Turner would be a great help to Collin Sexton and Darius Garland on offense, assisting in clearing out the paint for the pair to drive and also providing a target on the perimeter to help get those assist numbers up. 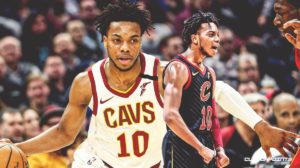