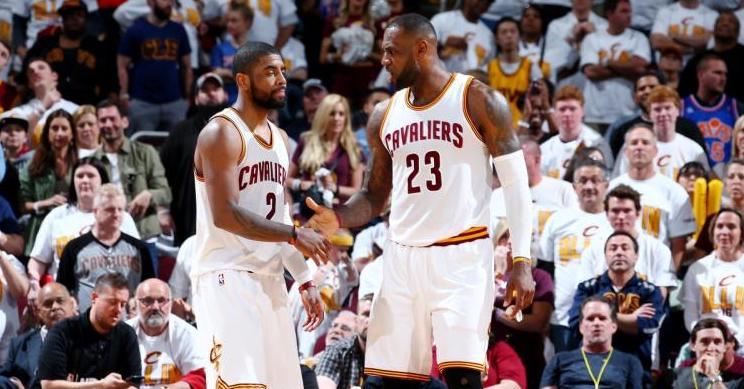 The highly-anticipated final vote returns for this year’s NBA All-Star Game starting lineups are in. 50% of this year’s overall tally came from fan voting, 25% came from players, and the remaining 25% belonged to a select group of media.

As reported by ESPN, LeBron James, Cleveland Cavaliers superstar small forward, leads all candidates in this year’s final count. “The King” is having one of the best statistical years of his career and is showing no signs of slowing down. At the mid-way point of the season, the 6’8″ three-time champion is averaging 25.6 points, 8.1 assists, and 7.8 rebounds per game. James has made 12 prior NBA All-Star Game appearances (2005-2016).

Kyrie Irving, who is also having a great statistical year, will be this year’s Eastern Conference starting point guard. The former Duke Blue Devil and number one overall pick in the 2011 NBA Draft is averaging 23.6 points, 5.6 assists, and 3.5 rebounds per game through the first half of the Cavaliers’ championship defending season.

The Eastern Conference All-Stars will have DeMar DeRozan starting at the shooting guard position. So far this season for the Raptors, DeRozan is averaging 28.2 points, 5.4 rebounds, and 3.9 assists per contest.

Cavaliers power forward, Kevin Love, did not make the Eastern Conference starting five, despite his averages of 20.7 points and 10.8 rebounds per game.

Antetokounmpo, who will be making a well-deserved first appearance at an NBA All-Star game, has given the Bucks quite a lift. “The Greek Freak,” as the 22-year-old break-out star is known, currently has averages of 23.4 points, 8.7 rebounds, and 5.6 assists per game.

Butler, on the other hand, has been on a tear as of late, averaging 24.8 points, 6.8 rebounds, and 4.8 assists per game which are all career-highs.

James Harden, who is averaging 28.9 points, 11.6 assists, and 8.3 rebounds per game for the Houston Rockets, will join Curry in the West’s starting backcourt. Harden has the first 29/11/8 stat line since Oscar Robertson in 1965.

Russell Westbrook, who is averaging 30.7 points, 10.5 rebounds, and 10.3 assists per game for the Oklahoma City Thunder, has the first 30/10/10 stat line since Oscar Robertson in 1962. Unfortunately for the Thunder superstar, he did not make this year’s starting lineup.

Looking at the Western Conference front-court vote count, Warriors forward, Kevin Durant, leads the charge. Durant is currently averaging 26.2 points, 8.6 rebounds, and 4.7 assists per contest. The former Texas Longhorn and four-time NBA scoring champion remains a master of beating opposing sides at the rim, at the free-throw line (86%), and the three-point line (41%).

New Orleans Pelicans big man, Anthony Davis, who is averaging 28.8 points, 12.1 rebounds, and 2.2 assists per game, will be starting in the Western Conference front-court.

Kawhi Leonard, San Antonio Spurs forward and two-time NBA Defensive Player of the Year, will be starting on the wing for the Western Conference. Leonard is averaging 24.8 points, 5.7 rebounds, and 3.1 assists per game. *

This year’s All-Star game is scheduled to be played inside The Smoothie King Center in New Orleans, Louisiana, on Sunday, February 19th at 8:00 p.m. EST on TNT.