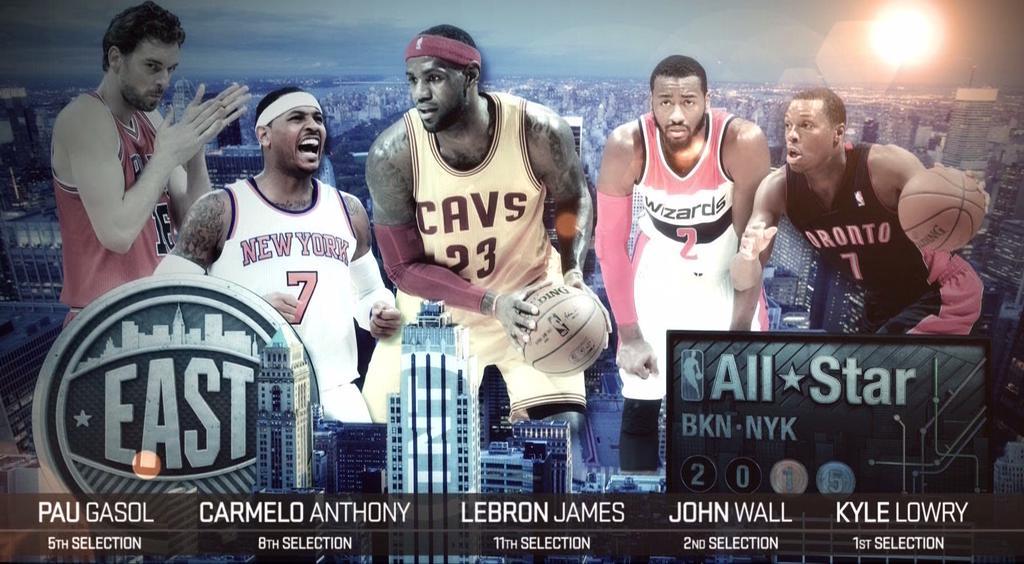 With 55 All Star appearances in between its players, the Eastern Conference will parade a well-balanced lineup with a good mix of big men, wings, and guards. The East squad boasts of the best young guards in the game today who will be running alongside the most athletic wing men and it spells nothing but electrifying action up and down the court. A reunion among members of the then-Miami Big Three wwas expected, but Wade pulled out of the All Star game Tuesday to rest his ailing body.

With that being said, we look at your 2015 Eastern Conference All Stars, beginning with the starters:

This one’s a no brainer and it has been the case for the past decade. LeBron James is by far the most decorated player in the league today and he’s expected to channel his two-time All Star Game MVP-winning self once the bright lights are turned on. In 10 All Star appearances, LeBron’s numbers have been close to his normal game stats with averages of 24.8 points, 6.6 rebounds, and 6.1 assists. He’s showing no signs of slowing down. Pau Gasol has arguably been the second best free agent acquisition during the offseason, next to LeBron James. The Spanish center has seen an upward tick in his numbers upon landing in Chicago and his performance so far has been at par, or even better, than his heydays in Los Angeles. He will be locking horns with his brother, West starter Marc, as soon as the ball goes up. Carmelo Anthony’s season has been less spectacular than the past couple of years, but he’s still churning up numbers good enough to warrant an 8th All Star appearance. He may be running on a bum knee, but that won’t stop Melo from lighting it up from anywhere on the court. People have speculated that he may be shut down for the Knicks’ remaining games after the All Star break so this could possibly be the last that we’ll see of him this season, but who knows. After feeling slighted from last year’s All Star starters, John Wall came back more efficient than ever leading the Wizards to the Eastern Conference’s upper echelon. Wall is having a career year in the field goal percentage, assists, and steals category and fans have obviously taken notice. The two-time All Star plays like a monster during summer league exhibitions and with the type of atmosphere that the All Star game has, expect the dynamic point guard to have his full arsenal on display for our viewing pleasure.

A lot of people thought Kyle Lowry deserved to be an All Star reserve last season, but fans made sure that the career year he’s been having so far won’t go unnoticed as he’s been voted to start in this year’s mid season extravaganza. Lowry carried the Raptors when leading scorer, DeMar DeRozan, missed a lengthy amount of time due to an injury and despite experiencing a slight decrease in production over the past couple of weeks, all signs still point up for the headstrong guard out of Villanova. Kyle Lowry always plays with a chip on his shoulder and that type of mentality should bode well for a strong performance come All Star Sunday.

Although picking the reserves for the East wasn’t as tough as it was for the West, there were many deserving names who were also left out like Kevin Love, Derrick Rose, Marcin Gortat, Al Jefferson, and Andre Drummond. But every reserve who was voted in very much deserves to be on the team.

A strong candidate for this season’s Most Improved Player of the Year award, Jimmy Butler is looking like a genius for turning down a 4-year $40 million extension this past summer as he’s bound to cash in bigger bucks with the way he’s been playing so far. He’s having his best season by far and he even won Eastern Conference Player of the Month in November edging out other big name stars in the process. There’s no defense played in All Star games but when the competition gets close in the end, the players’ competitive edge takes over and this is where “Jimmy Buckets” could make his mark. The main man in Miami, Chris Bosh is making the most out the void left by LeBron James’ departure and Dwyane Wade’s missed games. He is having his best season so far since his Toronto days and the Heat basically lives and dies with him now. It will be interesting to see him on the floor with both Wade and James in All Star Sunday. While Kyrie Irving’s numbers are currently not personal highs, he is still having his most complete season and the Cavaliers’ record is a testament to it. Yes, he is a part of a Big Three but that shouldn’t downplay his contributions to his team’s success as he’s taken huge strides this year especially as a defender and playmaker. His 55 point game against Portland is still league best this year and it can be argued that such performance could have catapulted him to the East’s starting backcourt had the voting ended at a later date. Al Horford is having a bounceback season after his strong start last year was abruptly cut by a major shoulder injury. He is having a highly efficient statistical season and it has translated to an extremely successful campaign for the Hawks thus far. Atlanta enjoyed a historical 19-game winning streak and a big part of that has been Horford’s steady play in the middle. The leader of the Atlanta Hawks, Paul Millsap typically embodies what the Hawks are all about: selfless On top of that, he is a multifaceted player who can be a pain to opponents in a lot of areas. He simply hangs around and by the game’s end, he has already filled up the stat sheet. He is a silent assassin but he is one of the league’s best all around players. He would have been a perfectly-rounded player if he’s able to sell hotdogs while playing on the court. The league just can’t get enough of the Hawks this year and it is for no ill reason. Atlanta is playing so good and a lot of credit goes to their court general whose heads up play has taken the Hawks to new heights. Averaging more than seventeen points and seven assists, Teague is easily enjoying his best season thus far and he will only get better as the Hawks soar higher. Surprisingly, Dwyane Wade has had a bounce back year in terms of overall production. With the additions of Luol Deng, Shabazz Napier, Danny Granger, and the slew of expected injuries, Wade’s production would be similar or even down from last year. Not surprisingly, Dwyane Wade was expected to miss some games to rest. But he’s only been able to play in 35 of the possible 51 games. Sadly, this will also prevent him from joining the East All Stars on the floor Sunday night With Wade missing this year’s All Star game, Adam Silver and the NBA had the tough task of assigning a worth All Star replacement. Of all the candidates, the player selected was more than deserving after sparking his team to the league’s best record with his sharpshooting abilities:

Kyle Korver is enjoying one of the best shooting displays in recent memory as he’s averaging an insane 50-90-50 (field goal-free throw-three point percentage) set of percentages thus far. Korver is Hawkeye personified and he fittingly becomes the fourth Atlanta Hawk on this year’s Eastern Conference All Star group.