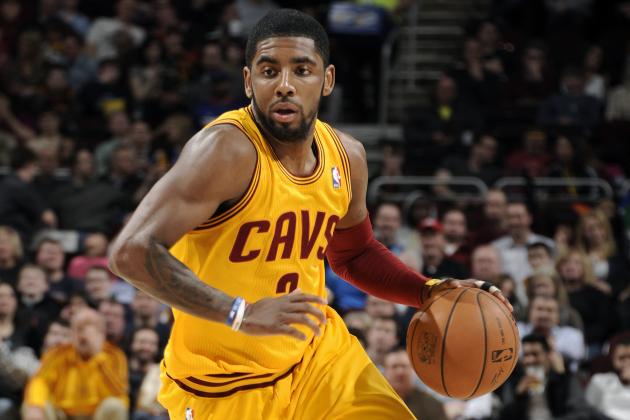 While I am 100% confident that every NBA fan knows who Kyrie Irving is, I still feel that this former All-Star has much more to prove.

Kyrie has been a huge asset to the Cleveland Cavaliers since being drafted as the #1 pick in 2011. He has averaged 20.7 pts per game, 5.8 assists per game, and has shot 37% from beyond the arc. During his 3 seasons of play in wine and gold, Kyrie has accomplished some outstanding career highlights and awards:

I think I am safe to assume that any NBA player would take these in their first 3 seasons! With all of these phenomenal stats, highlights, and awards why would I say that this is Kyrie’s year to prove his skills and value to the Cleveland Cavaliers and the NBA?

Reason #1 – The LBJ Effect
Which one of LeBron’s point guards improved their play significantly while playing with LBJ as compared to not playing with him? Two vital stats that every point guard needs to be looked at as elite are PPG and APG. A true Elite PG needs to score and be able to distribute the ball.

Let’s briefly look at two of these players.

{adinserter 2} What this means for Kyrie Irving is that it is yet another reason he needs to prove to the league that he is worth a $90 million max deal price-tag. Kyrie is looked at as a higher caliber PG when compared to Chalmers and Williams but time will tell if he and LBJ will be able to better one another. We all know LBJ’s career stats are very impressive and remained that way playing alongside all-stars such as Bosh and Wade. So the pressure is not on LeBron, it is going to solely lie on Kyrie Irving to prove his value and improve with having a star on his squad. Let’s correct that, it’s no longer ‘his’ squad but rather LeBron’s team. This will definitely take Kyrie time to adjust to, as it did with Wade in South Beach.

Kyrie Irving has not played with another big caliber player outside of the All-Star game. I have heard people say this about other players but it is quite true: It is not difficult to look good for a bad team. This same theory can be applied to Kyrie’s first 3 seasons in Cleveland. Cleveland has landed the biggest Free Agent of the decade, added some much-needed veteran talent, and lucked out with the top pick in the 2014 draft. Whichever way that it turns out the Cleveland Cavaliers will have the best roster that they have had since the inception of it’s roster in 1970. Will Kyrie continue to grow into a legendary PG on a team with this much talent?

Cleveland will be a playoff team now with LeBron James at the helm. Kyrie has not yet had his chance to taste the NBA playoffs, let alone even have a winning season. With Irving at the helm, Cleveland’s most wins in a single season are 33. 2014-2015 will give Irving the opportunity to taste his first winning season as a NBA player. Can Irving be the player that doesn’t let LeBron down during the big games in the playoffs? Will he step up? The youth and health is definitely in his favor.

This will be a huge season for Kyrie Irving and is most definitely a career-defining year. Only time will tell how Kyrie plays alongside this revamped Cavs team. Kyrie will have much asked of him with having LBJ on his side, playing with better players, and finally being on a team that is a contender. My eyes will be on Kyrie this season; this is his year to prove that he has what it takes to lead a winning team.