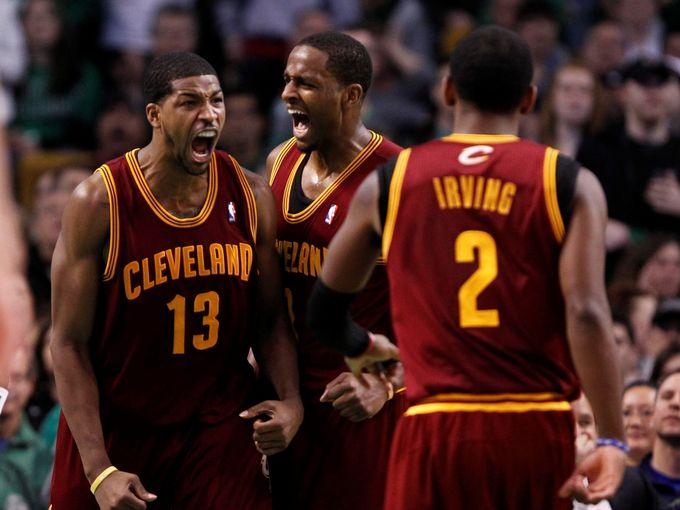 The rising city of Cleveland has been in a perpetual state of ecstasy this summer. Quite frankly, it’s been one awesome party that has stayed strong for months and continues to grow as media spills potential Kevin Love trade rumors. Nothing wrong with hype. Hype is exciting! But before we risk suffering a blow to morale from not meeting immediate championship-like expectations, us fans need to come down from cloud 9 for a second and think about real expectations. As a team and a city, we need to figure out where we stand and ask some tough questions.

Summertime 2014 in Cleveland has felt like a seemingly endless frenzy of sports accomplishments. From Johnny Football to the redemptive return of King James, we’re definitely enjoying a rare spotlight in sports. Heck, the Cleveland Gladiators even went 17-1 and clinched home field advantage throughout the AFL playoffs- who would’ve thought! But let’s not forget where it all started for the Cavaliers amidst Cleveland’s unforgettable summer: Kyrie Irving. Before we witnessed part two of “The Decision,” or debated the possibility of adding some Love into the Cleveland fairytale, our main priority was to resign the only person who kept the Cavaliers afloat for the past 3 years. Now, in his first season with legitimate championship possibilities, what’s Kyrie future? Does he have to become a pure point guard? Will he need to sacrifice minutes, shots and flashy moments? Where does Kyrie Irving stand?

Then there’s the young and talented of the Cavaliers. Assuming they survive in the crosshairs of this summer’s trading barrage and remain in Cleveland for the upcoming season, how will a rebounding Anthony Bennett and a promising Andrew Wiggins fair on a team now full of superstars? Will Anthony become relevant after a rather obsolete rookie season? Will Wiggins continue to excel after a dominating summer league and find a way to establish his own legacy in the shadows of LeBron and Kyrie? These questions apply to all of the Cavalier role players surrounding our superstars. Where do they stand?

{adinserter 2} What about where the Cavaliers stand among other teams? The Chicago Bulls have also emerged as a beast in the East with a fantastic offseason of their own. However, it’s creepy when you think about how similar each team’s summer has been. Chicago has revitalized the presence of a superstar (Derrick Rose/LeBron James), taken advantage of a flexible salary cap situation to sign more experienced players (Pau Gasol/Mike Miller) and signed young players that met high expectations (Doug McDermott/Andrew Wiggins). What might be scarier about Chicago is that they know where their role players stand. They know how Jimmy Butler will lock-down superstars, Kirk Hinrich will spread the floor with his shooting and Taj Gibson will secure the boards. To make matters worst, admittedly, Chicago’s defense is Fort Knox compared to Cleveland, surrounding a solid and competitive Joakim Noah. The rising Bulls, a solid Pacers squad, and a Heat team that still remains legitimate despite a summer of losses makes the East a little more daunting than we realize. Don’t forget, there’s a whole other conference.

If you still believe the East is better than the West, you’re probably that guy who bases everything he/she knows about professional basketball on the all-star game. Defeating teams from the West is a whole other challenge, but one that the Cavs will have to face in order to win a championship- literally. A league inhabited with the reigning champion Spurs, a always Thunderous duo of Kevin Durant and Russell Westbrook and a thoroughly deep Houston Rockets team are just a few obstacles. You can argue for any team, but the question remains. Compared to other championship-contending teams, where does Cleveland stand?

A lot of tough questions, I warned you! Having the right answer ahead of time would be really helpful to avoid disappointing a wonderful city like Cleveland that has already been through too many difficult surprises. In the end, we don’t know, and we will have to see how the pieces of this puzzling question come together. However, while living with the questions in search of elusive answers, we know one thing for certain: Cleveland will stand together.

This upcoming season, together, we will feel the nostalgia of seeing LeBron’s first return to the Q wearing his old number 23 and embrace the sentiment of his chalk toss. Together, we will witness all our players develop and find themselves. Together, we will fight our rivals, defend our court, wear our Wine & Gold, and strive for the Larry O’Brien Trophy. We will make history by being a part of a new era of Cavaliers basketball.

No matter how confusing and difficult the questions of our position in this league get, let’s be realistic, let’s be passionate, and let’s stand together.