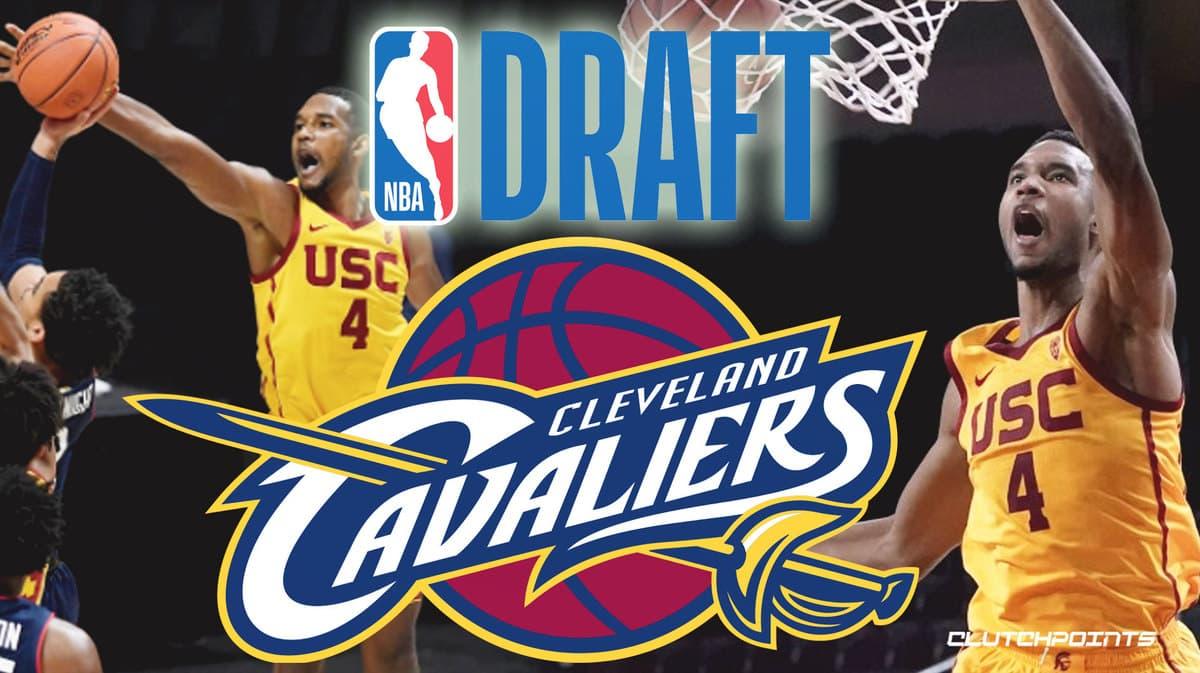 The Cleveland Cavaliers have the third overall pick in the 2021 NBA Draft. Once again, they have a chance to beef up their roster through the draft. Among the prospects available, Evan Mobley seems to stand out the most. In his lone year with USC, the big man showed off his size, mobility, and inherent defensive ability. This set of skills makes him the ideal player for the Cavs, given the pieces they already have. After all, we’ve seen many top prospects underperform and falter after being drafted by a team that didn’t need him in the first place. Let’s walk through two key reasons why Mobley’s potential will be maximized if he dons the classic Wine and Gold jerseys.

The first thing that would be apparent if the Cavaliers pick Evan Mobley is that their frontcourt will be very, very big. Allen stands 6-foot-11 with a 7-foot-4 wingspan while Mobley is listed at 7-feet with a similar wingspan, too. Cavs fans are already familiar with Allen’s impact on the defensive end. The man has the size and timing to swat or contest shots in the paint. The front office was so impressed with Allen that they even benched two-time All-Star Andre Drummond which subsequently led to a buy-out agreement.

Evan Mobley, for his part, is a defensive beast himself. Last season with the Trojans, Mobley led the nation with 2.9 blocks per game. You can say that Mobley is a lot more mobile and active on defense than Allen. Since apart from contesting shots, Mobley has shown off his ability to switch on to smaller guards and forwards. He has enough lateral quickness not to be left in the dust. But then again, what’s the use of comparing these two players if you can both have them on your squad? We always hear the adage that defense wins championships. It’s quite rare these days to find a player who specializes in this part of the game.

The Cavs will immediately have two defense specialists on their squad if they pick Evan Mobley.

On offense, the Allen-Mobley duo would also cause nightmares. As for one, Allen is well-versed in pick-and-roll situations. Even during his stint with the Brooklyn Nets, he’s shown that he’s very comfortable in this fundamental play. He gets a chunk of his baskets thru pick-and-roll plays. He’s also a good offensive rebounder and when he snags it, it’s almost always an automatic two points.

It’s understandable to worry that Allen and Mobley’s penchant for camping in the paint would create spacing problems. After all, the Cavs also have two speedy guards in Collin Sexton and Darius Garland who thrive on driving to the hoop. While Evan Mobley is a beast on the paint, it’s important to note that he has an outside game, too.

Evan Mobley has a reliable stroke from the perimeter and from deep. It obviously needs some polishing but the fact that it’s present in his arsenal is already an advantage.

Not just that, but Evan Mobley can also take it to the hoop all the way from the 3-point line. Highlight clips show how he also moves well without the ball, actively looking for cutting lanes to abuse.

The Cavs front office is still in a dilemma regarding Collin Sexton and Darius Garland. For all the promise they showed last season, there’s a threat of the feisty backcourt duo coming to an end. Rumors reveal that Sexton will be the one to go. If you’re a Cavs fan then you might be scratching your head as to why the team might part ways with their leading scorer (24.3 points per game) last season. His potent offensive output has blinded many to the weaknesses in his game.

As for one, reports reveal that the team wants him to take more 3-pointers so as not to be left behind with the current trend. He hasn’t really followed this advice and prefers mid-range shots and lay-ups. In addition, there are also lingering questions on his decision-making, pick-and-roll ability, and passing. In short, the big question is: amid his scoring prowess, is Sexton really making the team better?

At face value, Garland seems the better fit if the Cavs pick Mobley. The guard averaged 6.1 assists last season. He’s getting well-versed in pick-and-roll plays with Allen. As noted above, Mobley, too, has good hands and can finish well around the ring. He’ll have no problem with running those pick-and-rolls.

Upon Mobley’s entry into the league, his coaches will likely tell him to iron out his jump shot from the perimeter and from 3-point country. A reliable jump shot is a must these days. Once Garland has this in his toolbox, then he’ll be one heck of a complete player. Give or take two or three seasons, the Cavaliers — with their young core of Garland, Allen, and Mobley — will be serious contenders in the East.