How Cleveland can close the gap between Golden State

There are two ways that the Cleveland Cavaliers can close the gap against the Golden State Warriors. Both revolve around finding a way to be competitive when LeBron James is not on the court. James averaged 42.4 minutes per game in this year’s finals, which is too many if he is going to have the energy to give it his all the entire game, and have the energy to close out the games at 100%.

The Cavs inability to take James out of the game was never more evident than in game three. This was the game that Cavs fans having been clinging to claiming they should have won if Korver hit his open corner three or whatever other reason they come up with. James did not have the energy to take over the game at the end, because he had to play 46 minutes, and was plus seven while on the court. The Cavs lost this game by five, which means they were outscored by 12 in the two minutes he wasn’t on the court.

When LeBron is not on the court, our entire offense devolves into Kyrie Irving isolation. Irving is one of the best iso players in the league, but when the Warriors see it coming they are able to load up on whatever side of the court he is on, while having Klay or Durant guard him on the perimeter. Irving is unstoppable when the opposing team is focused on him because it allows Irving to play one on one, but this cannot happen when James is not on the court. The first solution to this problem is adding another elite isolation player that can be on the court along with Kyrie when LeBron is not on the court. The player that could fill this role would be Carmelo Anthony. If Kyrie is trying to drive strong side and the Warriors choose to load it up then we would have Carmelo waiting weak side to take his guy one on one, something he has made a hall of fame career off of. Carmelo is also extremely dangerous in the post, which would give our offense more versatility.

If the Cavs can’t pull off a trade for Carmelo Anthony, then they will essentially be reliant on internal growth to overcome the Warriors. First off it is important to establish that a team can go through enough internal growth to accomplish this feat. You only have to look back as far as the 2014 Spurs. Coming off a disappointing 2013 Finals loss in seven to the Heat, the Spurs dominated the Heat in five in a rematch with essentially the same rosters. Again, in order for this internal growth to be enough to match the Warriors it will revolve around being competitive when James is on the bench. In order for this to happen Ty Lue, who can still improve a lot as a coach, going into his second full year needs to have an offense in place for when Jamesis not on the court.

Irving’s responsibilities for offensive leadership must evolve beyond isolation. The Jose Calderon signing, which had gotten a lot of flack from fans was likely done in part to have a guy to mentor Irving. Calderon is a twelve-year NBA vet who averaged over eight assists four times in his career, and knows how to run an NBA offense. There needs to be more off-ball movement, which should include a lot of screens for Korver, now that they have an off season to implement these plays. Irving will also need to develop a two-man game with Kevin Love. These are two players whose offensive games should mesh well, but have never really developed chemistry. With more offensive versatility, player development, and the motivation of losing in the Finals, the Cavs should be able to be competitive when LeBron is not on the court.

The Cavs roster is stacked, and in a matchup against the Warriors, James is still factually the best player on the court. He is so great that the Cavs are competitive against any team when he is on the court, and Irving is able to go off in isolation when James is taking most of the focus of the defense. However, we need to have more variety in our offense when James is not on the court. This can be solved with adding a star offensive player like Carmelo Anthony, or developing more offensive sets in the off season to keep the Warriors defense from knowing what’s coming. 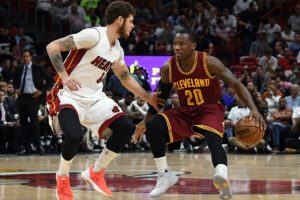