#1: Kevin Love had a Special Bond with a Cancer Patient

Love once kept a picture of Dylan Witschen in his Timberwolves locker, and would write #7, Dylan’s football jersey number, on his sneakers before every game.

Dylan was a football player at Anoka High School, after enduring a few big hits Dylan thought he had recurring concussions. When further tests were taken, a tumour the size of a golf ball was found in Dylan’s brain. It was operated on successfully, and Dylan was told there was an 85% chance that his cancer would be cured.

For six months, Dylan seemed cancer free, before his arm went numb and further tests were taken. The cancer was back, and it was inoperable. Dylan was given three to six months to live.

Kevin and Dylan had a tight bond, more than a few text messages here and there. Kevin would invite Dylan and his family to Wolves games and even into the locker rooms after games. They became very close friends, very quickly. A testament to that was a night after a big game for Love, Dylan and Kevin were fooling around in the locker room before Dylan looked him in the eye and offered him these words of wisdom, “you should have had more”. 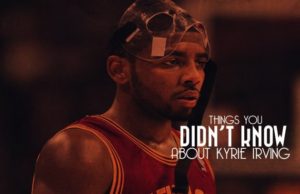 JUST IN: 10 Things You Didn’t Know About Kyrie Irving