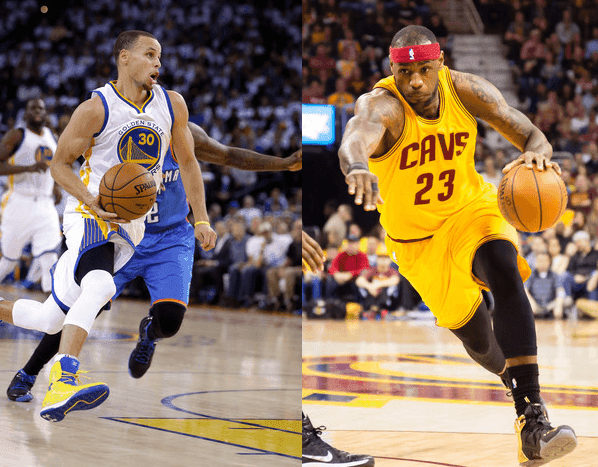 There are many who are considered contenders for the Most Valuable Player Trophy this season. LeBron James and Stephen Curry are probably two of the most deserving players. Before Thursday’s game between the Warriors and Cavs, we take a look at why LeBron James Deserves the MVP trophy more than Stephen Curry, starting with number 10:

10) LeBron Has Overcome Injuries This Season

LeBron James missed two weeks earlier in the season nursing injuries to his back and legs. In total, he’s missed 10 of the Cavaliers 58 games. In those 10 games, the Cavs have gone just 2-8, showing just how valuable LeBron is to this Cavaliers’ team. Stephen Curry has missed just one game this season, earlier this week as a matter of fact, and the Warriors lost that game despite 39 points from Klay Thompson.

Click “Next” to see the number nine reason LeBron deserves the MVP award more than Curry!

9) LeBron Has Had Unreliable Help At Times

To start out the season, Kevin Love and Kyrie Irving were vastly disappointing. To this point, K. Love is still trying to figure out his role and pick his spots on the offensive side of the ball. As if that wasn’t tough enough to start the season, Cavs center Anderson Varejao was lost to a torn Achilles in mid-December, really putting a damper on the Cavs’ championship hopes. Despite that, LeBron has led his team to the third seed in the East just a game and a half behind Toronto for the second spot.

Stephen Curry and his Warriors have all been relatively healthy with the early-season exceptions of David Lee and Andrew Bogut. LeBron has clearly had the tougher road this season.

Click “Next” to see the number eight reason LeBron deserves the MVP award more than Curry!

Click “Next” to see the number seven reason LeBron deserves the MVP award more than Curry!

7) LeBron Ahead Of Curry In Usage Rate (For Now)

James is currently sitting at a 32.8% usage rate. That’s good for 5th in the NBA behind Russell Westbrook, Kobe Bryant, Dwyane Wade, and DeMarcus Cousins. Stephen Curry sits at 28.8, which is 12th in the league. Early in the season, the occasional stagnant offense by the Cavs forced LeBron into doing a lot more ball handling, but as he, Kyrie, and the rest of the Cavs have gotten more acclimated with one another, that usage rate has gone slightly downward. The result? 17 wins in their last 19 games, going from a record of 19-20 to 36-22.

Click “Next” to see the number six reason LeBron deserves the MVP award more than Curry!

LeBron has led his Cleveland Cavaliers to 17 wins in their last 19 games, easily the best stretch of any team recently since the Hawks had a perfect January. Curry’s Warriors have gone 13-5 in that span, but have been able to retain the top spot in the Western Conference. The Cavs run has catapulted them into conversations of grabbing the second seed in the East!

Click “Next” to see the number five reason LeBron deserves the MVP award more than Curry!

5) Offense Revolves Around LeBron, Not Curry

The Golden State Warriors’ offense is not a tricky one. They may move the ball around a lot to get player movement and to possibly open up opportunities for backdoor layups, but their offense usually comes from Thompson or Curry’s three-pointers or their playmaking off the dribble. Curry is the primary ball handler on this team and oft takes it upon himself to score.. The Warriors haven’t always been able to rely on Klay Thompson for offense, so Curry is almost always the one generating for himself and his teammates.

For much of the season, LeBron James was the number one option for the Cavs. That’s not to say that he isn’t now, but following a busy January, James can let Irving, Love, Smith, and Mozgov work the offense and create plays for others. The fact that James has been able to keep his statistical averages right around the norm is quite impressive with the rough start to the season he and the Cavs have had.

Click “Next” to see the number four reason LeBron deserves the MVP award more than Curry!

LeBron has earned more accolades any other player this season, making him a far more intriguing pick for MVP of the year if the Cavs can finish in the top two of the Eastern Conference. In order to do that, Cleveland will likely need about 50+ wins, and they’re well on their way to that with 24 games left in the season. He’s surpassed Michael Jordan for 2nd in the NBA’s all-time All-Star scoring list, surpassed Allen Iverson for 22nd on the NBA’s all-time scoring list, and also recently became the NBA’s all-time leading forward in assists when he passed Scottie Pippin in their last game against the Pistons. And all of that after just reaching 30 years of age.

Click “Next” to see the number three reason LeBron deserves the MVP award more than Curry!

3) Figuring Out A Rookie Coach

LeBron James and Stephen Curry both have rookie coaches this season. Steve Kerr however, has played in the NBA next to Michael Jordan and Scottie Pippin. He was the President of Basketball Operations and General Manager the Phoenix Suns organization for a part of the last decade, bringing in players like Steve Nash, Amar’e Stoudemire, Jason Richardson, and even Shaquille O’Neal.

David Blatt, despite his fantastic European experience, had never played nor coached in the NBA prior to his season. The learning experience for both James and Blatt has been a tough one, but heading into the stretch run of the NBA season, both seem to be heading in the right direction as a unit.

Click “Next” to see the number two reason LeBron deserves the MVP award more than Curry!

LeBron James has had a major transition this past season, leaving Miami and coming to Cleveland to play with players he’s never played with before. Only one player has remained a Cavalier since James’ departure in 2010: Anderson Varejao. Andy is very used to James’ game, but he’s out for the season with a torn Achilles, so James has had to almost reinvent his game to suit the ball handling Kyrie Irving and sharpshooting Kevin Love. On top of that, the second and third options on offense haven’t played a single playoff game after numerous strong years in the league.

Curry, on the other hand, is very used to his Warrior teammates at this point of his career. He’s played almost two years with Andre Iguodala, and has been around the core of Klay Thompson, Andrew Bogut, Harrison Barnes, and David Lee for even longer.

Click “Next” to see the number one reason LeBron deserves the MVP award more than Curry!

In the final five minutes of a game with teh score within five points, LeBron James is more clutch statistically than Stephen Curry. With under five minutes, James has made 20 out of 40 from the field, including 7-13 from downtown, which is a 50% clip. Curry has made 17 out of 38 shots in the clutch moments of a game, including 2-12 from the three-point line, which is good for 44.7%

Clearly, James is the more clutch player this season!