10 NBA Players Who Pursued A Career In Rap NBA players have started being around more and more rappers and music artists, and there seems to be come kind of connection between the two.

A lot of rappers played basketball in high school and even college with the dream of becoming an NBA player. When many didn’t make it due to the overwhelming talent, some players turned to their studies while others turned to the microphone. NBA players often used rap as a hobby when they’ve got some time off from their tough professional schedule.

Some of these players have taken this hobby to a whole new level throughout their careers, recording songs and even releasing a few albums. Here are 10 NBA players who attempted a career in rap, starting with number 10.

Going by the name C. Webb, Chris Webber released this independent label album in 1999. Most of the people on our list were never able to put together a full album and release it, so Webber clearly put some thing and thought into this one!

Click “Next Page” for the ninth NBA player who attempted a career in rap! 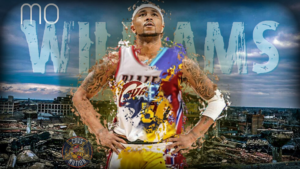 JUST IN: Mo Williams Returns To Cleveland For One Thing