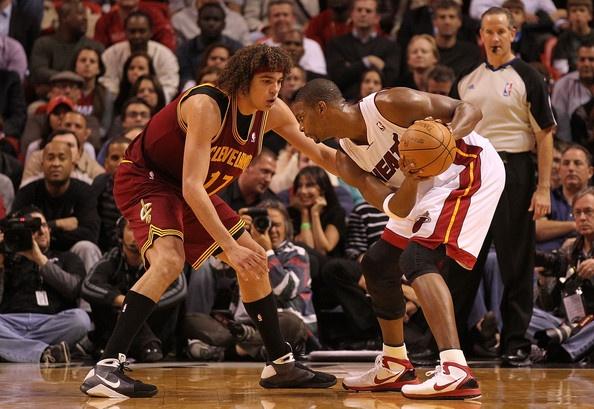 The 2014-15 season has been a joy ride for NBA fans as we’ve seen great games, spectacular buzzer-beaters, and highlight worthy dunks among other things. But this NBA season has been one of the most, if not the most, injury-riddled seasons as almost every team has had to deal with major injuries. Here, we’ll look at the top 10 most devastating injuries of the 2014-15 season, starting with the rookie at number 10:

The 2nd overall pick in the 2014 NBA Draft made his impact felt on a young Bucks team. He showed that he could compete with the best of teams and the superstars of the NBA, including a 22 point performance against the Cavaliers earlier this season. Unfortunately, Parker went down with what was originally thought to be a knee sprain, but further testing revealed he had a torn ACL, an injury that would eliminate him from playing the rest of this season. Coming off a torn ACL at the end of the 2012-13 season and a fractured kneecap in the 2014-15 season, Kobe Bryant seemed ready to continue his winding career with the Lakers this season as he looked fresher this season than any of the past two seasons. In a game against the Pelicans, Bryant went up for a baseline dunk, and immediately clutched onto his shoulder. He tried to stretch it out to no avail. Kobe played the rest of the game using his left hand, even making a turnaround shot with his left in a Laker loss. Tests following hte game revealed Bryant had a torn labrum in his shoulder with an expected recovery process of 6-9 months. Carmelo Anthony signed a big contract with the Knicks this past offseason, but has been battling knee soreness since he made contact with a player in the second game of the season. Melo tried sitting out games to help recover, but the pain and soreness was still present. Following the All-Star Game in New York, the Knicks announced that he would miss the remainder of the season and will undergo left knee patella tendon debridement. Although he is expected to be ready for next season’s training camp, orthopedic surgeons are fearing there may be other damage to his knee during and post-surgery. The Charlotte Hornets point guard had a rough start to the season statistically, but recovered well and played incredible basketball when center Al Jefferson missed extended time with an injury. Walker began having soreness and pain in his knee, but played a couple games through it. After getting it checked, Walker and the Hornets agreed that the best course of action was to surgically repair his torn lateral meniscus. Walker has said he does not plan to rush the recovery, but has targeted a March 16th return to game-action. After letting Josh Smith go this season, Detroit was actualy winning basketball games thanks to their second tier Big Three in Brandon Jennings, Andre Drummond, and Greg Monroe. In a game against the Bucks, Jennings reached for a swipe of the ball and unfortunately, extended his left Achilles to the point where he completely tore it. He will miss the remainder of this season, but is expected back next season. Kevin Durant and the Thunder discovered a Jones Fracture in Durant’s foot prior to the season, and he missed a couple weeks in the beginning of the season because of it. Doctors told him to expect occasional soreness to the point where he may have to sit out a game or two. He was able to recover and play through it numerous times, but it has resulted in him playing just 27 of his team’s 55 games. In addition to that, Durant just recently went through a procedure to reduce the pain and discomfort in his foot this weekend, and he will be re-evaluated in one week. We can only hope last year’s MVP can come back healthy and help his team make the playoffs this season. Anderson Varejao was having a great 2014-15 season. His good friend LeBron James came back, he was able to take his team to his home country of Brazil, and he was ready to finally compete for a championship once again. But as with every extremely active player like the injury-prone Varejao, injuries are bound to happen every once in a while. Varejao has had no luck staying healthy over the past couple of seasons, and the 2014-15 season is sadly no different. Varejao suffered a torn Achilles in early December, which would cut his season short once again. In light of the injury though, Cleveland was forced to make some moves to repair holes in their roster. Varejao going down made Cleveland trade for a big-man, and they were able to acquire Timofey Mozgov and Kendrick Perkins since. Russell Westbrook started the season as the clear go-to guy with Kevin Durant out. That plan was thrown out the window as he broke his hand in the second game of the season against the Clippers. Oklahoma City absolutely fell in the standings as Westbrook missed 14 games and Durant still recovering from the Jones’ Fracture. Westbrook’s return has definitely sparked the Thunder this season, and despite Durant’s strong play, it’s Westbrook’s incredible play that has him vaulting up in the MVP race for this season. It seems as though Westbrook is a far more important piece to the Thunder than Durant is, because Russell is single-handedly keeping his team in the playoff hunt with 40-point or double-digit assist games. Paul George’s injury last August during a Team USA scrimmage is probably one of the most gruesome injuries the world of sports has ever seen. a completely unexpectedly play resulted in George initially being ruled out for all of the 2014-15 season. His Indiana Pacers squad has definitely struggled at times this season with the loss of George to injury and Lance Stephenson to free agency. George has been hard at work in his recovery and if the Pacers are still in the playoff race come March, he’s expected to attempt an early comeback and help his team reach the playoffs. Currently, he is targettinga mid-March return, and Indiana would welcome his return with open arms. Chris Bosh showed his loyalty to the Miami Heat this season while signing a big contract with them. He was having an outstanding season in the post-LeBron era as he tried to lead the injury-riddled Heat into the playoffs. He did his very best and the Heat were in the seventh seed prior to the All-Star break. During the couple of days off earlier last week, Bosh was vacationing with teammate Dwyane Wade, but wasn’t feeling well most of the trip. As soon as they got back to Miami, Bosh went to get checked out in a Miami hospital for chest pains and after doing a couple tests, revealed that he had multiple blood clots in his lung. Obviously a very severe situation, doctors said that Bosh’s case was not life-threatening and they are expecting a full recovery in the coming months.