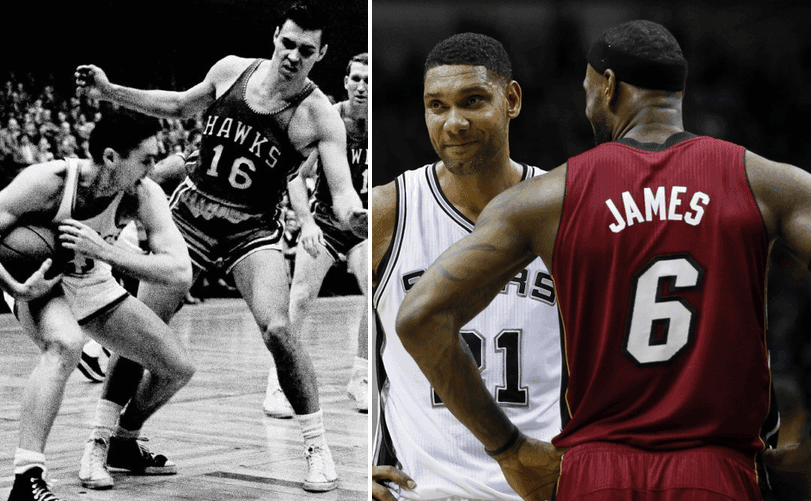 Everyone loves an underdog and the NBA Finals has provided us with a fair share of inspiring moments throughout the years. It’s not a long list as, most of the time, the level of competition at this stage evens up with the Beast of the East going up against the Best of the West. But every once in a while, we are treated to storylines featuring teams that are on opposite poles, or so we thought. We take a look back at those who defied the greatest odds and did what many thought was an impossible task. Here are the 10 biggest upsets in NBA Finals history, starting with number 10:

The Los Angeles Lakers brought heartbreak to the city of Detroit in the 1988 finals by winning their second straight title. The following year, the Lakers looked to accomplish a rare three-peat against the Pistons but the Bad Boys had other things in mind. Los Angeles flexed their muscle all the way to the finals but injuries took some air out of them and the Bad Boys of Motown, led by finals MVP Joe Dumars, capitalized on the opportunity and handed their former tormentors an embarrassing sweep. It was the first title in team history for the Pistons.

As time went by, the Miami Heat seemed to get stronger and more cohesive while the San Antonio Spurs, well, they got older. Poised to win three straight titles, LeBron James, Dwyane Wade, Chris Bosh and the rest of the Heat did not lack confidence as they entered the finals series against the Spurs but Tim Duncan and company wanted this rematch so bad and they simply took the Heat to school with a fantastic display of unselfish team basketball. San Antonio made the ball move around like a hot potato on their end of the floor and coupled with their hot shooting, the series was over in five games via a whopping average winning margin of 14 points. It was Kawhi Leonard’s coming out party as he was named finals MVP. 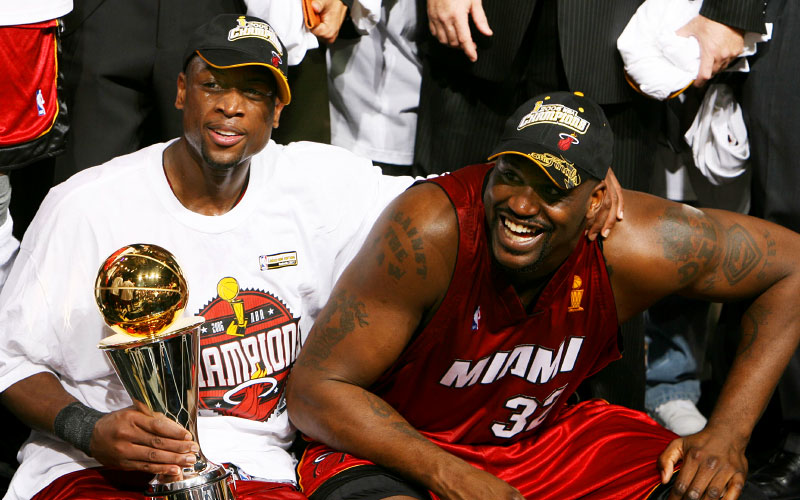 During the 2005-2006 wars, the Dallas Mavericks swept its regular season series against the Miami Heat by an average winning margin of 24 points. The two teams’ path crossed again in the finals and Dallas picked up where they left off, winning the first two games of the series. However, the Miami Heat did not know of the word “quit” and they rode the shoulders of Dwyane Wade who led his team to four straight victories en route to capturing the franchise’s first ever NBA championship. Wade was named finals MVP after averaging 34.7 points, 7.8 rebounds, 3.8 assists, 2.7 steals, and 1.0 blocks.

In 2010, the Miami Heat had one of the most celebrated offseasons in NBA history but ironically had one of the more infamous meltdowns in finals history at the expense of the veteran-laden Dallas Mavericks. The Mavs had their backs against the wall as they faced a 1-2 series deficit but finals MVP Dirk Nowitzki, Jason Kidd, and Coach Rick Carlisle engineered a comeback predicated on their “flow offense” and it led to a three game win run that closed the series at 4-2 for Dallas. Shawn Marion, Deshawn Stevenson, and Tyson Chandler anchored a collective effort on defense that limited LeBron James to a paltry, by his standards, 17.8 points per game in the series.

Despite having won over the Los Angeles Lakers numerous times in their previous title matchups, the Boston Celtics had an old Bill Russell, who was also their playing-coach, to counter the Lakers’ big three in Wilt Chamberlain, Jerry West, and Elgin Baylor. But in an inspiring display of heart and smarts, Russell limited Wilt to an average of 11.7 points per game in the finals and the Celtics defeated the mighty Lakers in seven games. It was a fitting end to the storied career of Bill Russell as the curtains fell down on Boston’s proud dynasty that resulted in 11 championships at that time.

Despite being the defending champions, the Houston Rockets still entered the finals series against the Orlando Magic as virtual underdogs. Houston was the sixth seed in the West while Orlando was on an Eastern Conference rampage, even eliminating the Chicago Bulls who had Michael Jordan fresh from coming out of retirement. The Rockets had old dogs Hakeem Olajuwon and Clyde Drexler while the Magic had the highly celebrated, young, and dominant duo of Shaquille O`Neal and Anfernee Hardaway. But that didn’t matter as experience won over youth as the Rockets swept the Magic behind The Dream`s mastery of his matchup with Shaq. 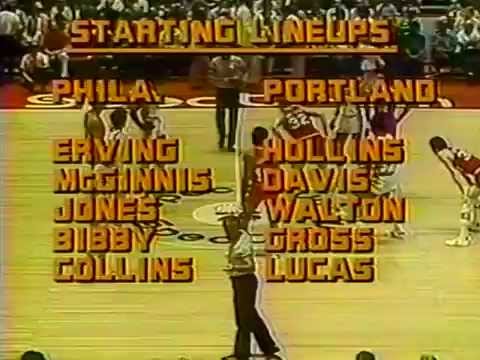 The Portland Trail Blazers entered the 1977 NBA Finals with a team composed of role players centered around do-it-all slotman, Bill Walton. But not only that, the Blazers were also a very inexperienced team of youngsters that had to go up against the powerhouse Philadelphia 76ers who boasted of all-stars Julius Erving, George McGinnis, and Doug Collins. The Sixers, unsurprisingly, took the first two games of the series but Portland rallied behind their trademark team play to win four straight and capture the franchise’s first and only title up to this day. Bill Walton closed out the series in style as he justified his finals MVP award with 20 points, 23 rebounds, 7 assists, and 8 blocks.

The Boston Celtics was starting to establish their legendary dynasty and they had all the pieces to work themselves up and into the NBA history books. But the St. Louis Hawks, the team that originally drafted Celtic legend Bill Russell, played the role of spoilers to what could have been an unprecedented ten straight championships for Boston. League MVP Bill Russell was dominating the boards with a 22.7 per game average while getting support from fellow studs Bill Sharman and Bob Cousy. But the Hawks, aching to avenge their finals loss to the same Celtic squad from the previous season, came out motivated led by Bob Pettit who saved his best for the title clinching game six scoring 50 big points. 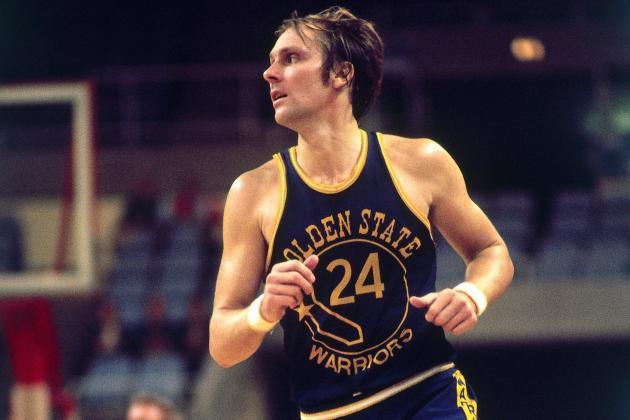 This series was unique as Washington, who held home court advantage, was given the option of choosing the series format due to the issues that Golden State had with their original building. The Bullets and Warriors both held the best records of their respective conferences but the former had a much better slate than the latter, 60-22 as compared to 48-34. The Bullets were led by Hall of Famer Wes Unseld but the Warriors’ Rick Barry willed his team to a series sweep. No one expected the Warriors to take this one, let alone sweeping the series but they overcame and are now part of NBA Finals lore. 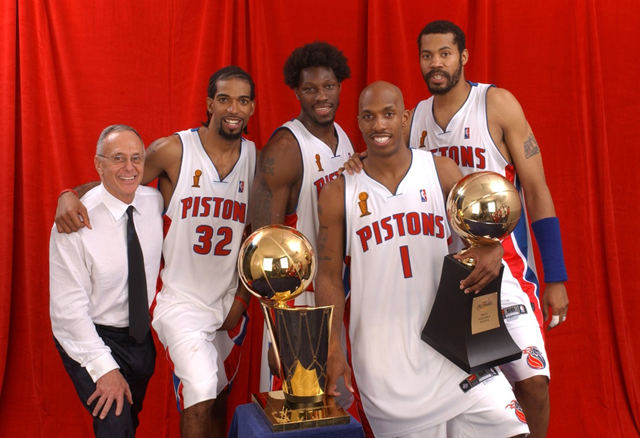 The Los Angeles Lakers had four future Hall of Famers on their squad compared to the Detroit Pistons who had a bunch of ragtag rejects. This disadvantage on paper became Detroit’s advantage as they relied on team play and their trademark hard nosed smashmouth demeanor to take the glamour team Lakers out of sync. The well-balanced and defensive minded Pistons took the series in five games but they undoubtedly outplayed the Lakers the whole series that some call it as the “five-game sweep”.