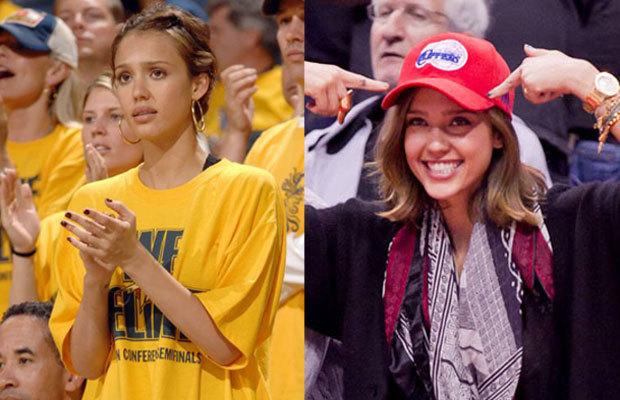 Whether you’re watching the game at home or live in the arena, it’s always fun to spot celebrities in the crowd. It all started with the Los Angeles Lakers in the 1980’s, where celebrities would make their presence known at sporting events.

Some celebrity fans have stuck with their teams through thick and thin; celebs like Jack Nicholson with the Lakers, Steve Perry with the San Francisco Giants, and Ice Cube with the Raiders.

There are, however, other celebrities though who can be found sporting gear for numerous teams from the same league. These are the 10 worst celebrity bandwagoners, starting with number 10 on the next page!

It’s absolutely unacceptable for Gyllenhaal to wear a Red Sox hat and then subsequently a Yankees one.

It isn’t uncommon for people to wear caps from different baseball teams, but only the biggest of bandwagoners would dare rock these two hats together. Check out this video of a guy wearing a Yankees’ jersey in Boston and the reaction he gets from it:

There are plenty of photos of Adam Sandler rooting on the New York Jets, but according to a report from Bleacher Report, he’s a diehard Steelers fan…

If that’s not enough, he’s often found rooting for the New York football Giants as well. How many big-time teams can one guy get away with cheering for?

Snoop Dogg seemed like a clear Raiders fan after the ESPN 30 for 30 “Straight Outta L.A.” was released, but apparently once the team left the city, the Dogg went nuts with some of the different NFL teams he latched on to.

He’s been seen wearing Steelers and Ravens gear, and those two are rivals. Add on the Cowboys and you’ve got Snoop Dogg in quite the little mess.

Still, if you’re going to root for the 49ers, you need to be loyal. Apparently her roots with San Fran don’t run as deep as they appear from the outside.

Hilson is a Georgia native and has been documented as an Atlanta Hawks fan.

One from such a loyal city fan base wouldn’t change teams just because they move to Los Angeles. But that’s what happened when Hilson appeared at Laker games. Does she really want to stay on the Laker bandwagon with L.A. as bottom feeders and the Hawks among the top teams in the East.

Penny Marshall used to attend Laker games on a regular basis, so her appearances at Clippers games in the playoffs recently makes her quite the L.A. bandwagoner. When in Los Angeles, its either ‘Purple and Gold’ or ‘Red, White, And Blue.’

The Clips already have Billy Crystal and Frankie Muniz, they don’t need you too.

Cena is incredibly strong and powerful so we won’t give him too hard of a time for this.

Still, the Lakers and Celtics have the most bitter rivalry in all of the NBA. How can somebody possibly root for both of these teams?

Rihanna is a well known supporter of the L.A. Lakers, but she turned her back on the team that started stumbling while the Heat rose to the top of the mountain. Once LeBron James left to Cleveland, Riri even made an appearance at the Cavs-Warriors NBA Finals.

It’s one thing to go to your teams’ NBA Finals games, but to repeatedly attend NBA Finals games and enjoy basketball at the highest level. Well, if you have that kind of money, then enjoy the games!

It’s become apparent that Bieber’s loyalty clearly lies with whoever is winning at the time.

In 2010, as you see above, everybody thought the Lakers had gained another celebrity fan in Justin. Just 3 years later however, he was spotted rocking this horrible Heat hat in South Beach. Thankfully, we didn’t see him in the NBA Finals rocking a Cavs jersey. I’m sure Cavs fans don’t want that troublesome bandwagon on their side.

Just because you’re pretty doesn’t mean you can root for whatever team you want.

Working in Hollywood, it was cool to see a big star taking the Clippers over the Lakers as their team. Then, suddenly, Alba was caught cheering her heart out for the Warriors.

With their playoff match-up last year, the Warriors and Clippers have developed a nice little northern-southern California rivalry while the LakeShow struggles. Fans from both sides of this will agree that it’s unacceptable for Jessica to try to frame herself as a fan for both teams. Go back to the Lakers with the other bandwagoners.