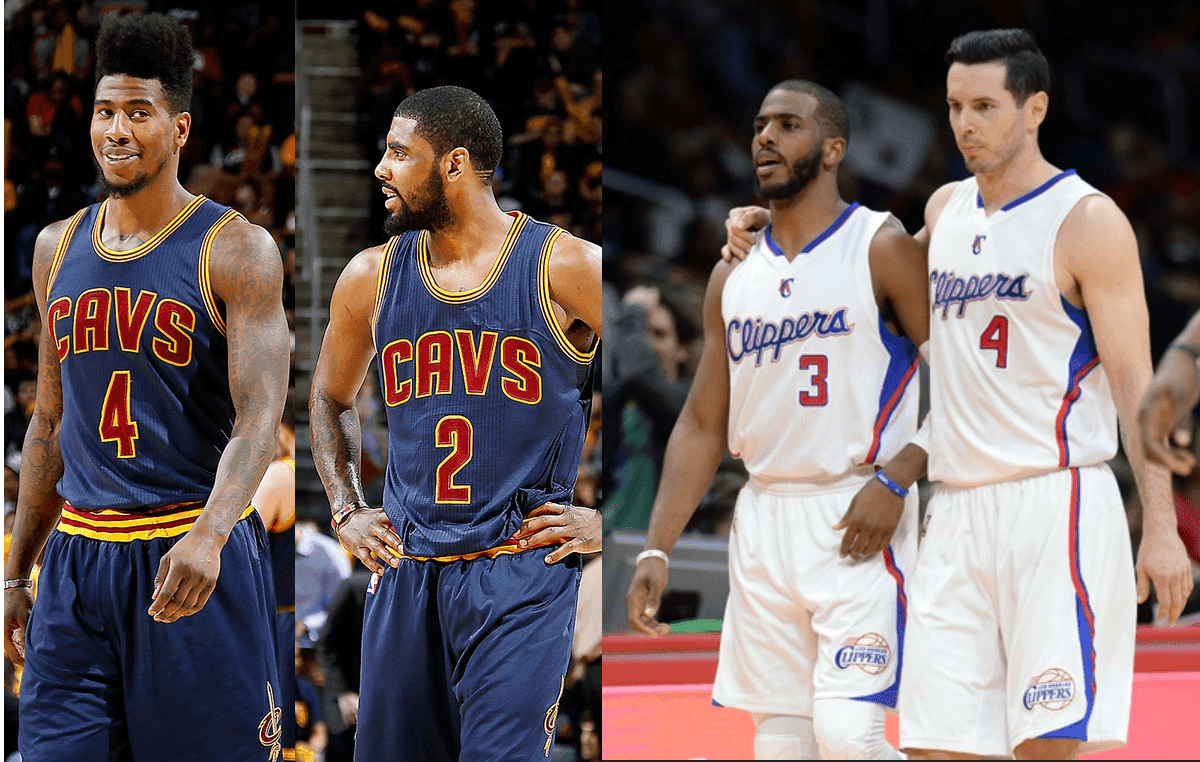 In the present-day NBA of which there are many quality guards, wing players that are very valuable for their ability to shoot, distribute the ball, and defend. Having one player be much better than their backcourt-mate isn’t as great as having both players playing at a high level, complementing each other. Individually they may not be as great, but when put together, these top 10 backcourts are the best in the NBA. We start with the 10th best backcourt in the NBA:

Although the ink from Ellis’ contract with the Pacers is still fresh, he seems to be a good fit with George Hill. Ellis likes to have the ball in his hands, whereas Hill is okay with playing off the ball. Ellis will have to improve his jump-shot percentage in order to make it work, and Hill will have to knock down shots night-in and night-out. The potential is there, but it is up to Hill and Ellis to execute.

Westbrook is coming off a MVP-caliber year, and he shouldn’t let up one bit in this coming season. Roberson figures to be the starter at SG, and he should continue to shoot the open 3’s presented to him when the defender doubles up on Westbrook. While the talents of Westbrook are unquestionable, the success of this duo will hinge greatly on Roberson’s ability to run and use picks on offense to get an open look, similar to Richard Hamilton in the mid 2000’s. Westbrook’s high level of play will positively impact Roberson.

We first got a glimpse of a Dragic/Wade backcourt towards the end of last season, and it was pretty good. The hope is that with Wade healthy, and with a whole off-season to work with, Dragic and Wade will learn to complement each other very well on the court. Wade is aging and can only take so many shots, so much of the Heat’s backcourt success lies in the hands of Dragic. 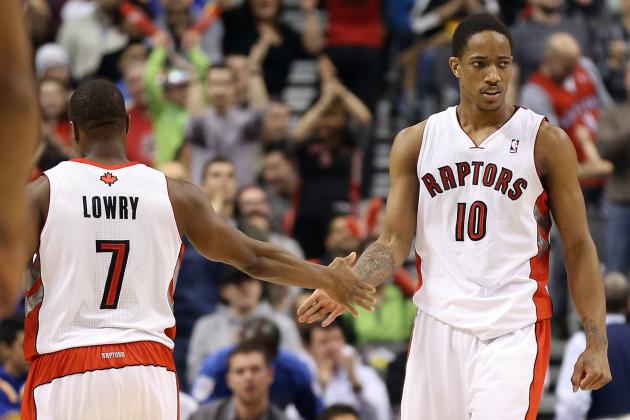 Some might think that the Raptors duo is ranked too high or possibly too low, but they have shown their ability to play at a high level, and also shown that when the team you’re facing in the playoffs is a bad matchup for you, there’s nothing you can do about it. Lowry was an all-star last season, and DeRozan most likely would’ve been an all-star too if not for his groin injury. DeRozan is averaging over 20 points per game, and Lowry is a potential nightly double-double with rebounds or assists. The Raptors hope that DeRozan can bump up his shooting a little bit more to lure the double team and free up Lowry up for the open shot. Once again, the potential is there, but it all depends on the players’ performance.

Chris Paul is without question the best traditional point guard in the game today. His ability to create baskets for himself and his teammate make his game so great. And when he needs to, he is also able to take over games, as he did in Game 7 in the Playoffs last season against the Spurs. His backcourt partner J.J. Redick has only improved his long-distance shooting during his time with the Clippers, as he shot a career best 43.7% from three-point land last season. His percentages and performance should remain at a high level with Paul dishing to him. Defense is a concern for Redick, but Paul’s ability to defend 2-guards should help alleviate some of the mismatches. 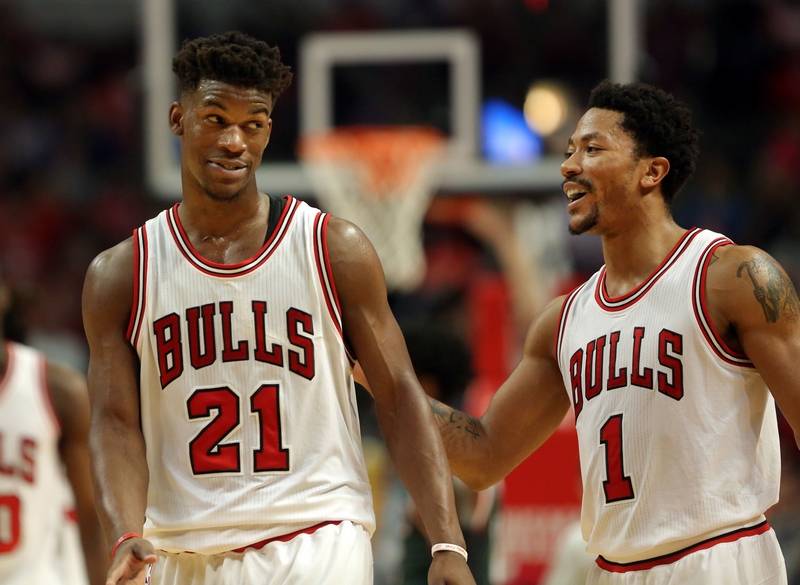 Rose has dealt with his fare share of injuries in the past few seasons, and Butler has stepped up amid Rose’s absence. Butler made his first all-star game, and was the leading scorer for the Bulls last season. With the hope being that Rose stays healthy, this Bulls backcourt should be lethal. Both guys are crazy athletic and with Rose’s offense paired with Butler’s defense, this backcourt has the potential to be the best in the East.

Harden hit the NBA like a storm, suddenly propelling himself into MVP contention last season. He will continue to create problems for defenses for years to come, without a doubt. The Rockets made a huge upgrade in the acquisition of Ty Lawson, despite his off the court problems. If Lawson can focus on the court, he could continue to be one of the league’s best passers. Last season, the Rockets often relied on isolation on offense, but with Lawson, the ball should move more freely to find the open man on the floor. This duo has the potential to be top 3 in the league. It all comes down to production and if they are able to build some chemistry. This Washington duo has a lot of upside, but injuries have kept them from reaching their potential. Wall and Beal both spent time in suits and on the sideline last season, and as a result, they were unable to build much chemistry. Wall is an all-star, and Beal is reaching an all-star level. Both players are both freakishly athletic. The thing that these two have going for them is the way that their play complements eachothers. Wall is more of a ball handler, who drives to the basket. Beal is more of a spot up shooter, so they will not clash over who has the ball in their hands. This coming season may be their breakout year barring injuries.

Kyrie had a great year with LeBron returning to the Cavs, scoring over 21 points per game. His handles are definitely top three in the game today, and his shooting is deadly from all over the floor. Kyrie is one of the best younger players in the league. The Cavs traded for Iman Shumpert last season to help the backcourt on the defensive end, and he has done just that. Despite Kyrie’s improvements on defense, the addition of Shump really solidifies the Cavs defense. Shump is also an above average 3PT shooter, which means easy buckets for him. With a full off-season to work with, these two should improve on playing together, and that will translate to better play on both sides of the court.

Click “Next” to see the best backcourt duo in the NBA

This championship duo is without a doubt the best in the NBA right now. Curry and Thompson have played at such a high level because they have learned to complement each other on the court. While both are qualified to handle the ball, Steph is elite with the ball in his hands, and is a deadly shooter with his unorthadox shooting form. Thompson is the better defender due to his height, but he is equally able to shoot. Thompson had a 9-9 three point shooting third quarter in a game last season, so doubts about his shooting are completely invalid. The only thing that could derail this duo is injury, but luckily neither player is injury-prone.